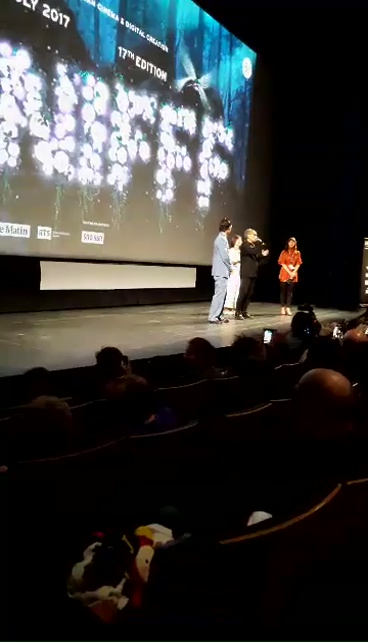 Not high res but you can experience the whole flow of the stage greeting along with the audience’s response, which was brilliant! They were fantastic =D I’ll briefly translate: Director Miike said when he woke up this morning and opened his hotel window, he couldn’t see anyone at all. He wasn’t sure if anyone would turn up for the screening lol. He also said the movie’s (post production) has just been completed. It hasn’t been screened in Japan, so this is actually the first ever screening in the world. Then he introduced Kento as “JoJo” lol. And Kento did a self-introduction in French. I only studied a little French before so all I could catch was like “Merci… Bonsoir. Je m’appelle Kento Yamazaki… bizarre de JoJo…. Neuchatel” lol. They then posed for some photos with the audience.