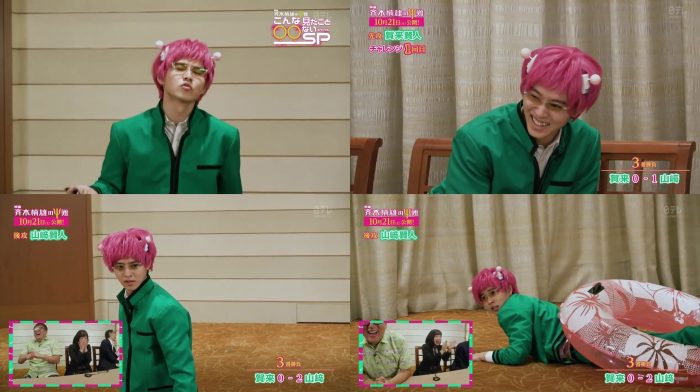 Yamaken played soccer for 8 years in school, while Kakuken has zero experience.

Kakuken: Before the recording of this program, Fukuda-san asked on LINE, what are the sports that I played before. I thought it’s probably for a “3-rounds battle” with Yamaken. So I replied “Basketball!” and he said “Alright!” but then it became this *points to soccer ball*
Everyone: LOL
Fukuda: No, no. Because we’re shooting this in a hotel now. We tried our best to search for a basketball hoop within the hotel. But there isn’t any.
Kakuken: Of course there isn’t.

Before the battle, Fukuda asked Yoshizawa Ryo who he thinks will win, and he said he saw Yamaken practicing just now, and “it doesn’t look like he played for 8 years” lol.

During the first round battle, Kakuken ne, after dancing around so much, he actually forgot to press the button properly! The stopwatch only showed 7s LOL. As for Yamaken, he decided to count in English, and got 34s.

During the second round battle, Kakuken was 10s off. And Yamaken, although he was singing and dancing, due to “certain circumstances” they weren’t allowed to broadcast it (possibly copyright issues haha). And he hit 34s again! LOL. “Maybe I’m a person who does 34 seconds”. And Fukuda was like… Yamazaki Kento is really baka desu ne XDDD

Although it’s a 3-rounds battle, and Yamaken has already won 2 rounds… Fukuda wants to make the last round such that it’s possible for Kakuken to make a comeback. It’s like a ‘give it your all’ thing for the last battle haha.

OMG I really laughed so hard here. You have to see if for yourself. I really didn’t expect our Kenken to do a handspring! The way he ‘landed’ and all his facial expressions then nailed it HAHAHAHA.