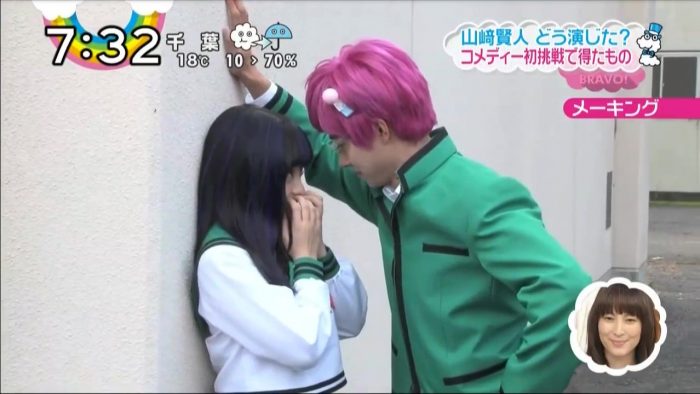 Yamazaki Kento has appeared in many romance movies, and is said to be the first person to perform the kabedon. He entered showbiz when he was scouted during the 3rd year of middle school, but…

Kento: Rather, I was embarassed being in the spotlight. But I was somehow scouted and I thought… “Shall I give it a try?” “Shall I plunge into this new world?” (lol). I was indifferent about [singing], so they said to me “why not try [dance]?” But when I went to the dance lessons, it was filled only with people who have been dancing since young. They are all like pros, and I couldn’t keep up with the movements at all (lol). For [acting] lessons, even if I suck at it, I was able to get in cos I had that ‘feel’ (lol).

And with an ‘elimination method’, he started his acting career, but…

Kento: We’d have to go for auditions, right? At the beginning I kept failing. So I don’t get paid right? And my train fares kept going up (lol). I failed over 30 auditions. Really, I was just getting by one way or another. But when I graduated from high school, I thought this is heading nowhere, I’d have to do it properly or I’d not be able to feed myself. And so I chose this path.

And so he decided to face this career seriously after graduating from high school. And he started receiving numerous offers for roles in romance movies. And this year he took on new challenges, like the action genre in JoJo.

Kento: JoJo is a big production, and there were action and many things that stimulated me. It’s become a turning point.

Saiki Kusuo, the comedy genre, is a whole new territory for him. They introduced the movie and Director Fukuda who did comedies like Gintama and The Brave Yoshihiko series.  Playing this role, Yamazaki Kento hardly had scenes where he talks. During the filming, a pre-recorded “inner voice” was played while he acted out the expression. *And on the monitor screen, Kento is seen laughing right after the cut lol.

Kento: I asked Director Fukuda “What should I do to prepare for the role?” and he replied “You don’t need to do anything!” (lol) So it felt like, as long as I can make Director laugh, it’s OK.
Interviewer: Is there a difference when filming with Director Fukuda vs filming other works?
Kento: I think it’s totally different… How should I put it? It’s like a comedy program.
Interviewer: Oh, it’s like all the actors come to you with their funny jokes.
Kento: Yes, they bring it to me.
Interviewer: Indeed, it’s difficult to make people laugh right?
Kento: I think it’s the most difficult thing to do.

First is to try to make the Director laugh ne.

Fukuda: Kento-kun has never really done comedy before, so when he say things to me like “How about doing it this way?”, I was like, “Yamazaki Kento would say such things?”, and he gave me many suggestions.

Then, during the interview, suddenly the lights went out. In response to that, Kento put out his hand as though he’s Saiki Kusuo. He’s fast to react. Apparently, he was trained by the numerous adlibs that the other cast did during the filming.

Kento: I heard that it’s scary working with the Fukuda Group from the second time onwards. The second time….. Even though I’m scared, I want to do it!

In the studio, the announcer said that when Kento went on Suda Masaki’s radio show, he was really tennen in a good way . She thinks that there are still many sides of Yamazaki Kento that they haven’t seen =D