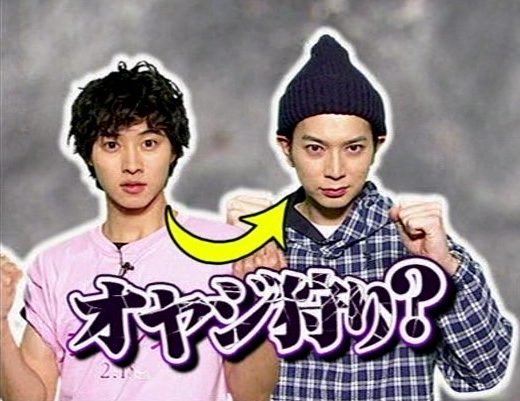 Let’s flash back to January this year when Muro Tsuyoshi posted this photo taken during his birthday party. He mentioned MJ and Toma too, but of course they can’t have their pics published… Then sometime in February, when Kento went on VS Arashi for Isshuukan Friends PR, Matsumoto Jun (MJ) revealed that recently Kento “stole” his coat. Here’s Kento saying how he wanted to have Matsujun’s clothes lol. Few days ago, this topic came up again on Suda Masaki’s radio show, All Night Nippon.

Suda revealed that he was at Muro Tsuyoshi’s birthday party held in Oguri Shun’s house early this year. “Kento Yamazaki” was there too, and so was “Matsumoto-san”. It was winter then, and as everyone were indoors they took off their coats.

Suda said to Kento, jokingly, “Matsumoto-san’s coat is super cool, right? Kento, if you wore that home, he’d probably give it to you, won’t he?” lol. Suda also said on the radio show that this coat was for sure expensive, the material itself felt like it was worth hundreds of thousands JPY at least.

Kento thought it was cool too, and he really wore it and wanted to go home. MJ was like, “Wait! That’s my coat.” and Kento answered, “Eh? Are you giving it to me!?” wwwww. At that time, the atmosphere in the room was like “No way he’s giving it to you”~~ However, MJ said, “Okay, I’ll give it to you.” and added, “In return, leave your coat behind.”

Apparently, Kento’s coat then was a really worn-out and tattered one from a second-hand shop lol. “But when Matsumoto-san wore it, he looked so cool!” “He just gave his coat to Kento like that, really! Wah, he’s a star!” Indeed =D

2 thoughts on “The truth behind the MJ coat incident”