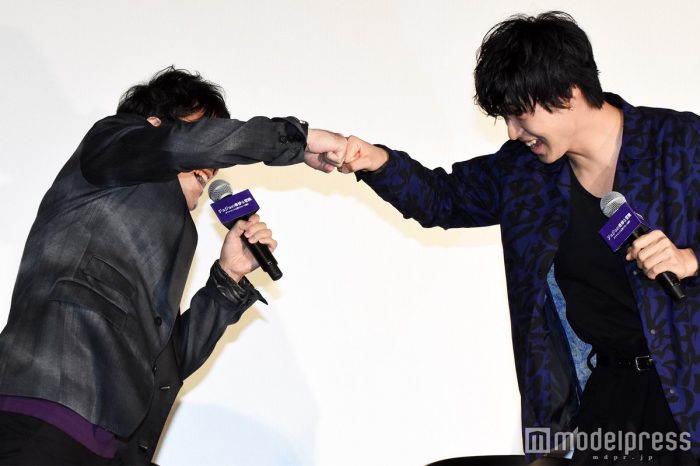 DORAA!!! A release special stage greeting for「JoJo’s Bizarre Adventure: Diamond is Unbreakable Part 1」was held yesterday at TOHO Cinemas Roppongi Hills in Tokyo, and attended by W-Josuke i.e. Yamazaki Kento who plays Josuke in the live-action movie, and Ono Yuuki who voices for Josuke in the anime. In fact, this event was the result of a tweet by Ono on 12 Aug.

They revealed that W-Josuke and W-Koichi (Kamiki Ryunosuke & Kagi Yuuki) met up in private, and the four of them went drinking together the other day. They also played table tennis, and apparently shouted ‘DORARAA!’ while playing! Ono also said that Kamiki-kun was very good in table tennis.

Ono has watched the movie three times. First in Tokyo, second in “Morioh” (Sendai) last week when he posted that tweet, and he actually watched a third time the day before. Apart from reading the manga, Kento also watched the anime to prepare for the role. At first it was ambiguous and he didn’t know if he had to say the “DORARARAA” thing. Ono revealed that he had to practice that word everyday for six months before the recording of the anime. To say consecutive “RA” is very difficult. Ono gave some advice, and Kento put it to practice immediately by shouting out the phrase.

According to an article, the two Josukes were ‘flirting’ around after that and the MC even asked if they were dating. From the photos below, Kento was touching the 3rd Josuke (on Ono’s T-shirt, lol) and also offering “him” the mic ne. Let’s wait patiently for more video reports =D

Selected photos from the event (from various sources):