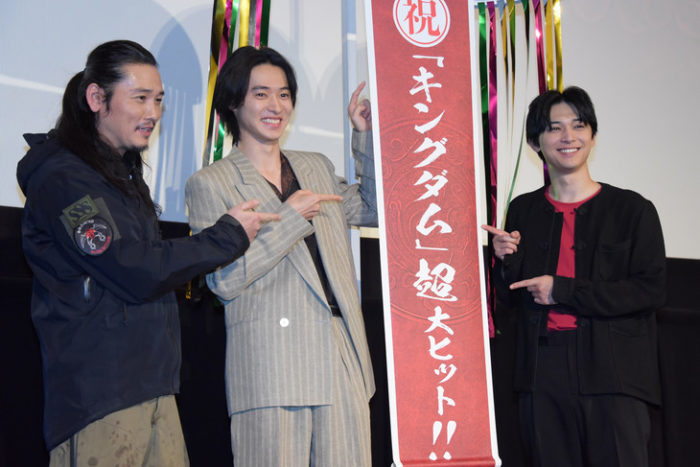 The big hit stage greeting took place this morning in Shinjuku Wald 9. Yamazaki Kento and Yoshizawa Ryo appeared on stage to greet the audience, and Sakaguchi Tak came on later as a special guest. The MC announced that as of 27 April, Kingdom has taken in more than 1400 million yen (1.4 billion yen) in the box office.

About the fight scene between Shin and Saji, Kento said “He allowed me to go at him for real. I was really aiming for Tak-san’s head.” This made Tak-san get into serious mode as well. “For just a moment, I felt like I was fighting not against Yamazaki Kento but against Shin. It’s the first time I felt this way.” Apparently there was a 1 minute long take of Shin vs Saji, but only certain parts were cut out and used in the final film. But that minute long fight was so intense that Kento thought he was going to die. “The main character can’t’ die yet!”, he thought as he tried to fight off Saji. Ryo said that Kento showed him that clip, and he felt that the tensed atmosphere between the two of them were perfect.

I really hope they include this in the BD/DVD Making.

Kento: *thinking hard…* Ah! (Ryo/Audience: *LOL*) Can you defeat the Avengers?
Tak-san: That’s right… Let’s go with Iron Man first. He has an iron plate so we can use the ‘wave’ (apparently one of Tak-san’s fighting method) to defeat the guy inside. I think I can do it…. But, I don’t want to fight Hulk. It’d be like fighting a wild gorilla, so I’m most afraid of him… If it were before he transforms, then I can do it. (lol)

“If during the Kingdom stage greeting, you were attacked by the audience…?” Tak-san looks at the audience — and it was a full theatre — and said he can take them out in 5 minutes 🙂