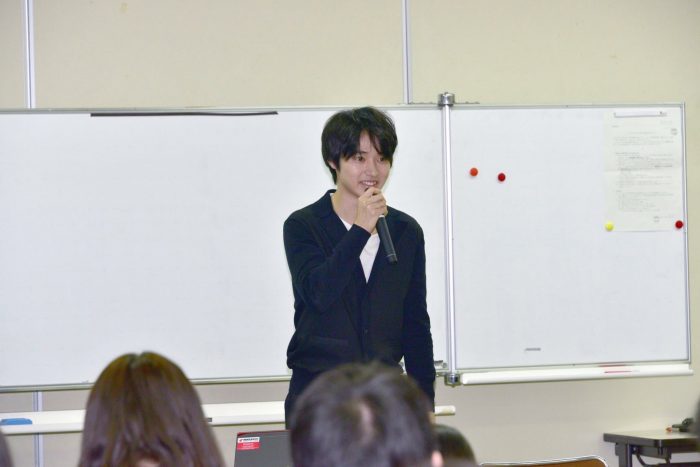 Some time earlier this month, Yamazaki Kento made a visit to the headquarters of Fujitsu General in Kawasaki. He was dressed fashionably in black and white and looked calm and composed when he appeared.

After speaking to the company president Saito, the president brought him to a research classroom where he surprised new employees with his appearance. When he entered the room, everyone went “eh?” and “what’s going on?. They looked totally shocked, especially the female employees who couldn’t seem to contain their happiness.

Kento-san, who’s of the same age as the employees who joined this year, gave encouragement to everyone and said “let’s all do our best!” At the end of the session, they took a group photo for memories sake.

He also went around the company to various departments, which raised the tension of the employees. Finally he was also brought to the show room and was given a run though on the various local and overseas products of the company.

“Yamazaki Kento-san, thank you very much m(__)m” The staff who wrote about this on Facebook talked about Kento heading over to the rehearsals of Satomi Hakkenden right after the visit. “From 15 April onwards, Satomi Hakkenden will be staged across the country, I’m really looking forward to it ＼(^o^)／”