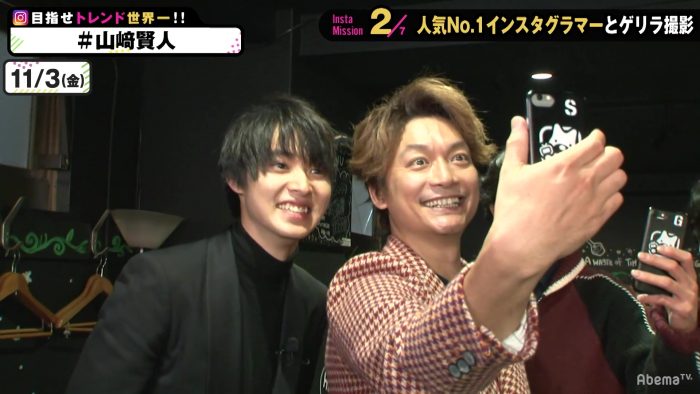 So Kento attended two Hyouka stage greetings at United Cinemas Toyosu, then headed to Shinjuku and appeared live on this “72hr honne terebi”. Thank god we have a HD version of this clip released on the official AbemaTV YouTube channel =D

Kento looked nervous ne… and he admitted it too lol. They asked, and Kento told them he has 2.23 million followers (on Instagram), and that he created the account two years ago last year, some time in summer. He introduced the SNOW app, and said it could do things like exchange faces, or everyone having the same face etc.

After fiddling around a bit with their phones, Shingo was like “Oh shux, I don’t know how to use this SNOW thing.” LOL and Kento helped him a little. There was a staff helping them with installing and using the app too, but Shingo and Kento started doing the face exchange thing, and they were laughing at how Kento’s fringe became Ryo-san’s eyebrows.

Kento held out his phone and asked, “can we take one together?” Then he said “Maybe it’s possible to do one with 4 of us in it.” So Tsuyoshi and Goro joined in, and the shot he took had all their faces mixed up ne. Kento’s face was on Tsuyoshi’s head, and Shingo’s face was on Kento’s head LOL. Shingo asked if it’s okay to upload these photos, and Kento said it’s alright. Then it was Tsuyoshi’s turn to take wefie with Kento, who seemed amused by whatever that was on Tsuyoshi’s screen.

I didn’t watch the live cast, but I guess after this location, Kento went with Katori Shingo to Kabukicho where they took photos with Godzilla. Seems like along the way, Shingo actually ‘protected’ Kento from screaming fans. That was so sweet. I wish they shared that in HD too.

After his appearance on AbemaTV, Kento probably headed straight to Toho Cinemas Shinjuku (where Godzilla is lol) to attend the final two stage greetings for Hyouka. What a busy day for him too ne! Otsukaresama deshita!