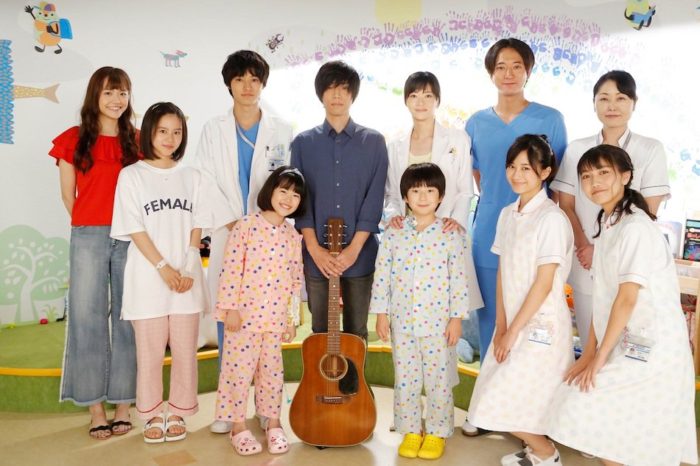 To give encouragement to the Good Doctor cast who have been filming consecutively for days, the drama’s production team held some kind of event and invited androp vocalist, Uchizawa Takahito, to perform the theme song for them in the studio.

It was in between filming Togo Memorial Hospital scenes that Uchizawa entered the Pediatric Surgery play room with a guitar in his hand. He said, “As though to light up people’s hearts, this song was inserted at points in the drama where people are feeling most uncertain.” In response to that, Kento said “It matches the feel of the drama perfectly. Thank you for this really brilliant song.”

Uchizawa was really nervous performing in front of the cast, he said “my hands can’t stop sweating”, and even stopped playing midway as he forgotten the lyrics. He told them, “I’m really nervous, and had forgotten the lyrics~” which made the cast and staff laugh. Ueno Juri added “On the contrary, I’m glad to be able to listen to such a brilliant song many times.” He composed himself and performed the song again from the start.

This is a clip from this morning’s Mezamashi, shared by a fan on twitter =D