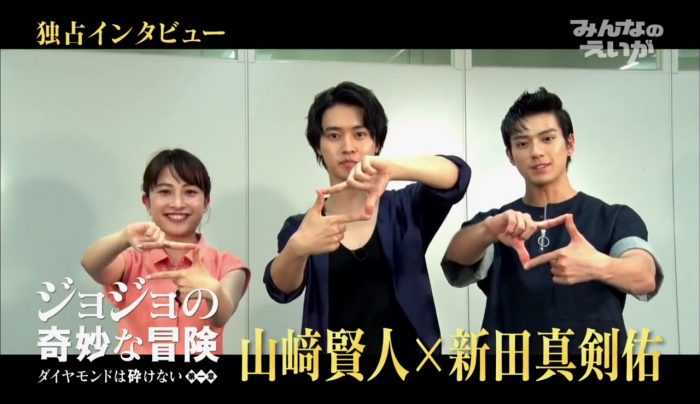 Q: How did you feel about the movie?
Macken: Yamazaki Kento was really cool. I felt that this has become Yamazaki Kento’s movie. The scene when he first appeared was very cool. It gave me goosebumps.
Kenken: It’s really cool. The music is cool, the costumes, the hair and make up too. Filming it in Sitges was moving.

Q: What does Yamazaki Kento feel about Okuyasu?
Kenken: He really loves his brother, he’s stupid, but an interesting fella.

Q: Do you know each other before filming started?
Kenken: No, this is our first time acting together.

Q: Apart from the filming, did you guys go anywhere together?
Macken: During the filming period in Japan, I stayed over at his house. We’d be talking about our acting and the next day’s scenes, etc.
Kenken: It was like, we went for filming together, and we went home together.
Macken: Since we were going to the same place tomorrow, we might as well.
Kenken: My house was close by.
Macken: I stayed over for about a week.
Kenken: Macken doesn’t have a house.
Macken: Hey, wait, wait. LOL I’d be misunderstood. Don’t say that.

Q: If your Stands were reversed? If Mackenyu-san has Crazy Diamond, and Yamazaki-san has The Hand?
Kenken: Josuke will get super angry when something is said about his hair. If he has The Hand, things might turn out disastrous.
Macken: LOL that’s true.
Kenken: If someone said to him “What’s up with your hair?”, he’d go “What did you just say!?” and *PON* use The Hand to scrap him away LOL. We wouldn’t even know where that guy disappear to.