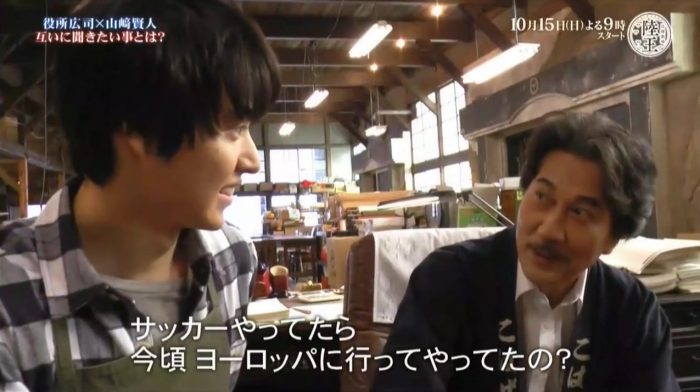 Just translating some parts which I thought were interesting. Yamamoto Rina is a new TBS announcer, and it’s her first time doing MC. Btw, she’ll also appear in Rikuou as a poster girl of the bank in Saitama.

Yakusho: When you were scouted, have you already quit soccer?
Kento: I was still playing soccer then.
Yakusho: Were you in a dilemma over whether to become a soccer player or to enter showbiz?
Kento: Yes I was, but just like Daichi, I got injured and was told that it’d be difficult to continue competitive soccer. And this was a good opportunity, so I thought I could try something new, and I entered showbiz this way.
Yakusho: If you’ve continued soccer then, you might be playing in Europe now.
Kento: No, no… *shy*

Kento: When you were in your 20s, how was it like?
Yakusho: I was around 26 when I was entrusted with more important and bigger roles, and memorising the lines was like… I got nervous from the moment I started memorising them. And I wondered if I was even suitable for this job. I was panicking…
Staff: That’s unexpected.
Kento: Indeed… I’d like to find out more in detail from Yakusho-san next time.