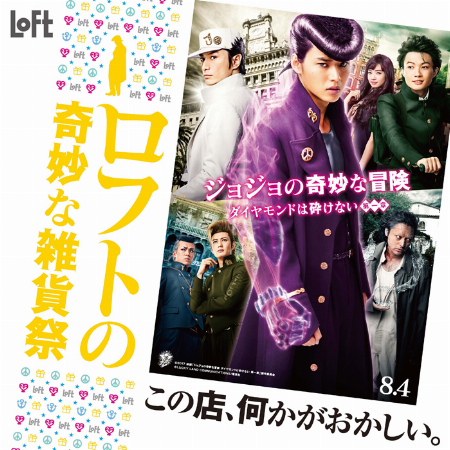 To commemorate the release of JoJo movie, all Loft shops in Japan will run a campaign starting 18 July called 「Loft’s Bizarre Misc. Goods Festival～Something is weird about this shop～」.

【Early bird presents】
Purchases above 2,000yen during the campaign period entitles you to a limited edition design ticket clear file. For the first 60,000 people only, while stocks last. 【Original prizes campaign】
Apart from the purchase of above 2,000yen during campaign period, you can apply via a form (check the Loft special campaign site) to win original prizes below. Winners will be chosen by balloting.

【Live Action Movie「JoJo’s Bizarre Adventure」Costume Exhibition】
The costumes of Higashikata Josuke and Kujo Jotaro will be on display at the following shops during the respective periods: