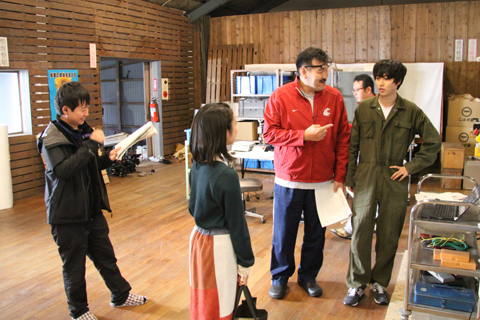 Daichi takes Iiyama-san’s place and had an active part in this episode! “It happens to me often too, when I tell someone to wait, and then totally forget about it lol. That kind of feeling…” etc. said Director Jai as he checked on Daichi’s emotions in the scene where Akane came to bring him food. They also discussed on the changing emotions of Daichi when he received the technical drawings of silklay, etc. The change and his growth were shown in his words “Please believe in Kohazeya!” to Mogi when they handed Rikuoh over to him♪ On the other hand, Misaki-san takes Fukuko-san’s place in the sewing of Rikuoh. The emotional changes in the two young people of Team Rikuoh are the highlights of Episode 5 ne. How does everyone feel about this?

These are the technical drawings of the silklay production machine. They appeared only for a while in the drama, but when you look at it like this, everything was really drawn out in detail. And then, and then. They were using the dry ice to create smoke, to show that the silklay production machine is working. In between such filming breaks,

Hmm,
Yamazaki-san & Kamishiraishi-san’s wild dance was interesting and I wanted to take a video of them, but all I had in my hands was a camera…
σ(^_^;)

With such a tap dance lesson, The final form of Rikuoh is completed at laaast!
“It’s toooo awesome that you’d laugh about it right!”
With these words from Director Jai, Ichikawa Udanji-san acted out the feelings of Murano-san when he first held the completed Rikuoh. By the way, this Rikuoh, It’s indeed super lightweight at 152g!
Director Jai was shocked♪
“Eh, this is its real weight!? We’re overdoing it right~lol”