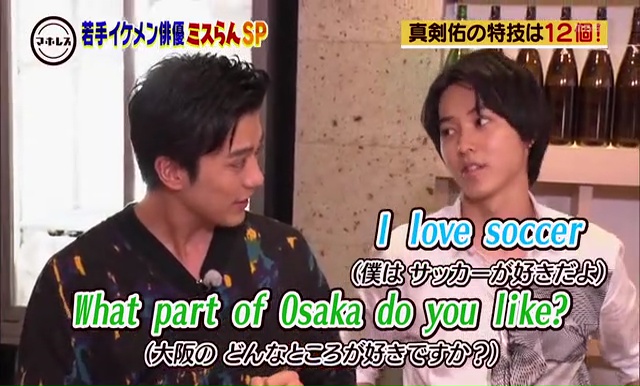 When Kenken and Macken went to Osaka to promote JoJo, they went on Mahou no Restaurant. I’ll be translating some parts here. Thanks to day93 for the clip!

Kento: When I come to Osaka, I don’t really know about restaurants here. Pasta? I’d like to know what are the restaurants in Osaka selling nice pasta.
Momoko: Who’s going to recommend?
Ozawa: Let me do it.
…
Ozawa: Know what? Kento said he really loves pasta, but I’ve some good news. Actually, pasta also really loves Kento.
Kento: Thank you! Thank you!
…
Ozawa: Kento-kun and I are friends, you know.
Kento: We acted together in a drama, and I went over to Osawa-san’s place before. He also took me out for meals before.
Ozawa: Yamazaki Kento stayed over at my place before!

That walking over the poles thingie was cute. I could replay it over and over again haha. Kento was like, that thing happened to be along his path so he just walked over it naturally lol.

At the pasta shop called “Pasta Baka Ichidai”, they were served cold pasta, the most popular dish of this shop in Summer. Kento said that this is the first time he’s having cold pasta. After eating one mouthful of pasta, everyone was waiting for Kento’s comment, and Kimoto said “he took too big a mouth that’s why it’s difficult to comment right?” lol. Kento finally said “Delicious. The pasta is chewy. It’s cold so it’s easy to eat. And the truffle smell is subtle.” “Yamazaki-kun, you’ve said everything. I’ve got nothing more to add.” As for Macken, when asked to comment on the pasta, he said “On 4 August, JoJo’s Bizarre Adventure movie will be released…” lol

What Ozawa whispered to Kento was,

“This might be cold pasta, but to me it’s passionate pasta.” =D

And then Macken asked Kimoto to whisper something to him too, but what Macken ended up saying was (once again) “On 4 August, JoJo’s Bizarre Adventure movie…..” LOL

Ozawa: This is really delicious, but what you like most is that right?
Kento: Yes, it’s that.
Ozawa/Kento: Arabiatta!

While waiting for the Arabiatta to be cooked, they decided to ask Kento about some rumours. The first one is “When he went home after his graduation ceremony, he was nearly naked?”

Kento: (I gave away my) blazer, necktie, shirt, bag… But I’m not a pervert (lol).
Kimoto: But during your middle school, were there juniors who came to your classroom to look at you during break times?
Kento: Yes.
Momoko: People who’d say “his face is small naa~”
Ozawa: I’d like to see photos from that time.
MC: We have one photo here.

And the photo is actually of Ozawa when he was 15. Then, Maki-san seemed to be smitten with Macken, who said he came to Japan (from America) when he was 17.

The next rumour about Kento is “His visuals is worth 100 points but inside it’s 0 points“.

MC: This is what actor and his friend Suda Masaki-san said.
Kento: It’s because we are close that he can say such a thing. Isn’t he a good guy?
Ladies: What does this mean?
Kento: Well, I was receiving more and more clothes from Suda-kun’s house…
Momoko: Receive? Receive? Not steal?
Kento: *Grin* Well, I wore them home… But Suda-kun came to my home and took back his clothes.
Kimoto: So to Mackenyu, how many points is Yamazaki-kun?
Macken: How many points? *looks at Kento* Well, I guess…about 3 points.
Kento: Oi!
Macken: He’s really kind, and in the movies, he sparkles like a prince… but the usual Yamazaki-kun is, someone who is very accepting, so although I say on TV that he’s 3 points, in fact he’s totally 100 points.
Momoko: Then to Yamazaki-kun, how many points is Mackenyu?
Kento: 2 points.
Ozawa: Oh, you (are good enough to) do variety shows!

And finally the Ariabatta is done. It’s a kind of Ariabatta that Kento never had before.

Next up is what Macken wants to eat, and he said that as he stayed in America for a long time, he’d like to have Japanese-like meat. While they were walking to the yakiniku shop, Macken got so easily distracted e.g. by ice cream, that Kimoto asked him “are you listening?” lol. Then Kento saw a spiderman doll and said “spider”, which got Macken distracted once again. Nobody was paying attention to Kimoto in the end. “This is perhaps the first time I’m so angry on TV.”

When they reached the shop and Kimoto said “here we are”, Macken immediately turned and wanted to go up the stairs. Kimoto was like “not so soon!” and “is this your first time doing location shoot???” Then at the entrance, Kimoto entered the shop first, and Macken closed the door to shut him in haha. Kimoto hit Macken’s chest and said “oh you have a good body”, but after Macken entered the shop, Kimoto told Kento, “To me, that boy now is 0 points.” LOL

They tried the most popular dish in the shop first, tomobara nigiri. And Macken ate Kimoto’s share!!! lol! “Macken, don’t eat mine! LOOK AT ME! I really wanted to eat it…”

The first rumour about Macken: he has 12 special skills.

Kento: He plays waterpolo and wrestling. And does karate too.
Momoko: How about instruments?
Macken: Piano, flute and saxophone.

And one of the 12 skills is “English”. And they asked him to display that skill with Kento. At 21:53, we have that now famous English conversation =D

Btw I think the way Macken pronounces “Osaka”, he places the emphasis on the “Saka”, which sounds like “Sakka” (Soccer) in Japanese, so I can understand why Kento misunderstood lol.

The other rumour about Macken: he loves older women.

Macken: This is a rumour that came out from magazines. I’ve never said such a thing before. But this doesn’t matter at all. Totally, anyone will do– I mean…
Kimoto: It’s more like, it doesn’t matter if it’s older or younger, as long as it’s someone I love…
…
MC: Mackenyu-san, how is the steak?
Macken: Erm, I feel a little bad that I took your food earlier…
Kimoto: Can I eat it?
Macken: I think this piece is nicer.
Kimoto: I like the fillet part.
Macken: *takes a piece of meat* what to go with?
Kimoto:  With salt, please. *brings the saucer towards Macken”

And after dipping with salt, Macken decides to eat the meat himself haha.

Poor Kimoto-san lol. Macken didn’t dare to face Kimoto and just kept staring at Kento haha. Kimoto kept saying, “Rather than the meat, shall I chew you instead?” and started pinching Macken’s chest. That’s when he realized that his chest muscles are so hard.