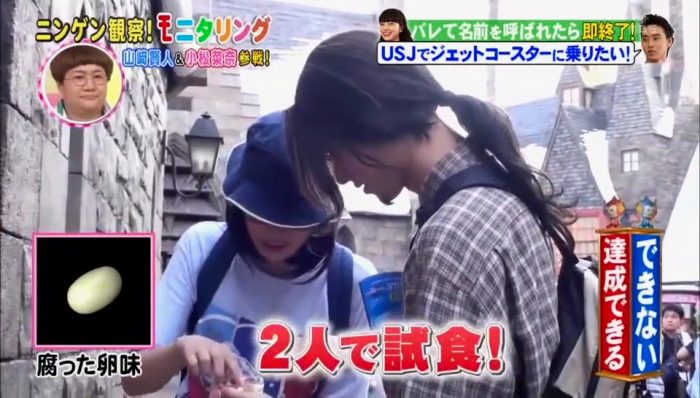 Yamazaki Kento, Kamiki Ryunosuke and Komatsu Nana were at USJ (Universal Studios Japan) to attend the JOJO Real 4D attraction special event. They weren’t aware that Kosugi was seated among the audience. He shouted out “wait a minute!” to surprise the three, and Kento had the biggest reaction lol.

Kamiki: Why are you here today?
Kosugi: We’re going to shoot for Monitoring.
Nana: What?
Kosugi: Yamazaki-kun and Komatsu-san will do it.
Nana: Eh? (points to Kamiki) Eh?
Kento: (taps Kamiki’s shoulder) What?
Kosugi: As Ryunosuke has another work scheduled later, I’d like Yamazaki-kun and Komatsu-san to do the location shoot this time for Monitoring.
Kamiki: Yes.
Nana: It’s my first time.
Kamiki: Do your best!
Kosugi: Let’s go to the next location!
Baby in audience: !@$%^#
Kosugi: Even a newborn baby is excited.

The rule is to disguise themselves and infiltrate the place to achieve their goals. If they get recognised AND their names called out, the filming will end. So what are their goals?

They start to choose their disguises. Kento puts on the specs, and the staff said “Even if you put on strange glasses, you still look so cool.” And when they get all dressed up in their disguises, they got into their roles immediately LOL. Their image? Otaku siblings. Kosugi named them “Hachirou” and “Mutsuko”.

And Kosugi had to run off for some stage work, so he left.

Then the Monitoring starts.

The both of them were nervous. Kento calls her “Mucchan” and they got through the ticket gantry safely. First they decided to queue up to buy popcorn.

Kento: Do you queue in line for stuff?
Nana: Yes, I do. Recently, what did you queue for?
Kento: Recently? I think, the ramen shop. How about you, Mucchan?
Nana: I queued for shaved ice.

At the popcorn counter:

Kento: (to the staff) Can I have it in the Minion thing?
(After paying for it)
Kento: Mucchan, you wanna wear it?
Nana: Oni-chan, you wear it.
Kento: Oni-chan will wear it?
…
Kento: When was your last time to the amusement park?
Nana: About 6 months ago.
Kento: How about you?
Nana: About 2-3 years back.

At the Wizarding World of Harry Potter:

Kento: I wanna run into the wall at Platform 9 and 3-quarters!
Nana: I want to too! With that, right? The cart!

We have guessed that Kento is a Harry Potter freak, since he did that ACCIO! video on Instagram last year. Now it’s kinda confirmed lol~ Anyway they got themselves into Honeydukes and were looking at the Bertie Botts Every Flavour Beans.

(Paying up at the counter)
Staff: For your own consumption?
Kento/Nana: Yes.
Kento: Please issue the receipt to “Kosugi”. (lol)

And the two of them stood facing the wall to try out the beans.

They continued walking towards Hogwarts Castle. The two of them wanted to take a photo for memory sake, but were afraid to be exposed, so they decided to approach a foreigner.

Kento: Excuse me, Sir. Take a picture? On Back! Castle Back! (LOLLLL his English~~~)

While they were checking the photo, a lady approached them.

Lady: Excuse me, can you help with a picture?
Kento: No problem. I’ll take it for you.
Lady: (I mean) Can we have a photo taken together?

Oops! And Kento looked at Nana immediately. If the lady mentions their names, that would be the end of the shoot. When he realised they were in a pinch, Kento immediately turned and walked away, heads down, saying “I’m sorry… well… Universal….” hahaha. And as their names weren’t called out, they’re SAFE this time, and decided to head to another area.

Kento: Oni-chan here will get the soft toy for you, Mutsuko.
Nana: Oni-chan, do your best!
(After the first shot, and they thought they shot everything down)
Kento: Yes!
Nana: Yay!
(Kento & Nana high fives)
Staff: There’s still one more left.
Kento: Oh, there’s one more left. I’m sorry. We were rejoicing by mistake.

A lady by the side seemed to be suspicious of them. When it was Nana’s turn to play, she told Oni-chan that “the person beside me is looking at me” and they decided that for this last shot “let’s stay calm and not have any reactions”. BUT… after Nana missed it, their reactions were even bigger than before lol!

These two~ even though they try to keep it down, they naturally react like that ne haha. It’s hard for them to stay unnoticed. But they were SAFE once again as they managed to slip away without being called out to.

Kento: I wasn’t able to give you the minion…
Nana: I’m sad…

And Kento said it’s about time they try the rollercoaster (his goal). They walked on and when they saw the rollercoaster, their reactions were so hilarious… “Wahhh~~~ ohhhh~~~~~” A really weird pair of siblings ne!

But when they finally reached the rollercoaster area, Nana confessed:

Hachirou decides to take the ride himself and Mutsuko will watch him from below.

Then… The staff at the attraction told him that hair wigs are not allowed on the rides, so he had no choice but to remove the wig, and take the ride as Yamazaki Kento himself. He had staff taking the ride with him. It was 2hrs after the shoot started and he finally gets to ride the rollercoaster! But… the sky has turned dark by then, so whatever that was shot on film… was totally dark. We couldn’t even see where Kento was haha.

Watching her brother from below:

And after the ride:

Nana: Oni-chan!
Kento: Mucchan!
Nana: I was watching you! Although I can’t see your face at all. (hahahaha)
Kento: It was so fun. Really fun, it felt so good.

And so, Kento achieved his goal. And now they head towards Shinsekai (New World) in Osaka for Nana’s goal – to eat kushi katsu. When they saw the “Shinsekai” sign, the two of them got high again, and with their hands raised~

And they found the kushi katsu shop. Kento asked the two ladies beside him on their recommendations. They recomended doteyaki, and the lady on Nana’s side also said they ate 8 sticks so far. They were conversing so naturally, they seemed to have forgotten they were on location.

They ordered doteyaki, kushi katsu and tamanegi, 2 each. Then they started talking about more private stuff.

Nana: How did you enter (showbiz)?
Kento: I was scouted.
Nana: Oh, really? Where?
Kento: Takeshita Dori.
Nana: Eh, the same!
Kento: Really? You know, Daiso’s…
Nana: Ah! (clears throat, and points to herself) Me too.
Kento: The same? Really? That similar?

Nana then started talking about her worries.

Nana: I took acting lessons at the start. But somehow, I thought I can’t do it. No way I can do it. I couldn’t memorise the scripts, so it’s definitely impossible for me. I thought I’d never go down that path…
(To Kento) Do you have any worries?
Kento: Worries? Well, yeah I’m worrying, actually. Like for JoJo. I don’t know what I should do…

And then, Kento turned to the ladies beside him.

And these seniors in life do give good advice ne.

Kento dropped the food into the sauce which attracted the attention of the couple on Nana’s side. They couldn’t stop glancing at them. Nana didn’t realise and still asked the two, “is there a celebrity that you like?” And the guy replied “Komatsu Nana”. LOL.

And with this the Monitoring ended.

Back in the van, they were asked about their thoughts on this shoot.

Kento: It was fun.
Nana: Yeah. Somehow, disguising ourselves can be such fun. It was exciting, and it somehow became our private time!

Really thankful that we could see such a side of them in this show. I hope they do get to act together – as love interests hehe – in a movie or drama soon! =D