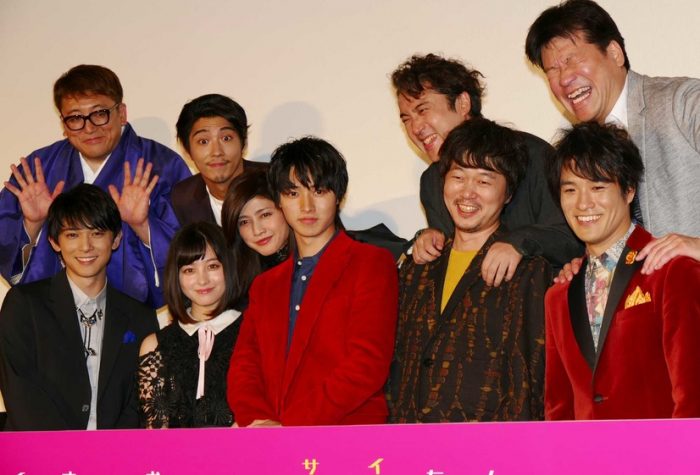 Kento: Erm… my role in the movie is one that has a straight face (tsukomi)…
Jiro: You’re doing good. Ganbatte.
Kento: Everyone here…
Jiro: You’re doing good.
Kento: The funny jokes (boke) from everyone here is… It was difficult trying to withhold my laughter.
MC: To be honest, were there times when you laughed which resulted in an NG?
Kento: Yeah I laughed quite a bit.
Jiro: Eh, you laughed? You’re so cute (^^) =D
Kento: LOL
Jiro: Oh please continue. I’m sorry for interrupting.
MC: Your role isn’t supposed to laugh, right?
Kento: Yes.
Fukuda: Can the two of you over there (Jiro & Muro) don’t talk so much?
Jiro: Why can’t I? I’m talking to Kento, you know.
Muro: Why not? Then why were we handed mics for, huh?
…
Fukuda: If we three talk too much, then Yamazaki Kento won’t get to talk.
Jiro: Then you (Fukuda) also should stop talking!
Kento: LOL
…
MC: So this is what happens during the filming, everyone making you laugh?
Kento: Yes. Well— yes.
…
MC: Who’s the one that made it hardest for you?
Kento: Eh well… everyone was funny, but really… erm, Muro-san was… When the camera was only on me, and even if the camera wasn’t on Muro-san, he kept saying different things (during the actual take and the test) and I wasn’t used to it, so I was almost laughing all the time. Although I had to keep a straight face…

MC: This time, Yamazaki Kento is one of the conditions set for this movie. (Fukuda would accept this movie only if Kento was cast as Saiki Kusuo). So how was it?
Fukuda: He’s really splendid. Really I think, as a comedian– this is actually his first time doing comedy. But I think he’s really suited for it. From now on, I’d like to work with him on more projects…. Well, today he’s dressed like Lupin though.
Kento: LOL
Jiro: Don’t say things like “Lupin”.

They talked about Yoshizawa Ryo’s Chuunibyou (Middle school second year syndrome) character. Oryo said that this role is the one he was most “into” in his acting career so far. He really thought he had that chuunibyou inside him. The movements he did in the movie wasn’t from Fukuda’s directions, but he did them on his own. There’s a scene where Kento, Arai and Oryo were at the rooftop, and apparently Arai and Kento had a hard time trying to control their laughters cos of Oryo’s funny movements. Fukuda revealed that Oryo kept saying “this is so fun! this is so fun!” He never saw that side of him even during Gintama.

Kasahara, who plays the super-passionate Hairo, said he’s so happy to be able to show off the part of his body which he loves the most — his butt lol.

MC: Just now you were introduced as “Kaku Ponta”.
Kaku: Yes, I’ve become Kaku Ponta. I’ve changed my name.
Jiro: What’s going on? What’s going on?
Kanna: It’s written over there too (fan placard) — “Double Kento-san”
Kaku: Well, it became a problem, cos he’s called “Kento” and I’m also called “Kento” right? So just now…
Fukuda: Yeah. Let me explain. There’s a PR bangumi that will air sometime in the beginning of October, and in there, there’s a battle to see who’s the real Kento. We were filming that this morning. There were three rounds, and the loser would become “Ponta”. The result was a loss for Kaku Kento, and so from today onwards, for all Saiki Kusuo related events until the opening day stage greetings, Kaku Kento will be called “Kaku Ponta”.
Kaku: In short, “Kakupon”. (and he did a series of ‘PON’ actions lol)
…
Arai: That was close. If I lost, I’d have become “Hiropon” (Philopon, a banned drug in Japan). LOL.

As Jiro-san only filmed for 6 mins, he didn’t get to meet Kento at all during the filming.

Fukuda: What kind of relationship do you guys have?
Jiro: Death Note.
Kento: We did Death Note together.
Jiro: At that time, he was also filming the other drama–
Kento: Mare.
Fukuda: And that’s when the child-actor topic came up.
Kento: The child actor that played my son (in Mare) really looks like Jiro-san.

Apparently on the set of Death Note, Kento told Jiro that “The boy who will be playing my son really looks like you. Please look at this photo.” and Jiro replied saying “No, he doesn’t look like me at all.” But later when Keita’s son appeared in the drama, everyone on the internet were saying “He really looks like Sato Jiro!”. Jiro tweeted about it, and Fukuda replied. That was how that child actor was cast as the young Buddha role in ‘The Brave Yoshihiko’. They all joked that the casting came from Kento =D

Jiro: Ah shux, we’re not talking about Saiki Kusuo at all.

Kento said that Arai’s “OFFU” is the funniest. He probably said the most “OFFU” in the movie. Arai said it’s easy to act that cos Hashimoto Kanna is cute in real life.

Memories from the filming – Kento vs Yakiniku.

Fukuda: To be honest, Yamazaki Kento and I went to eat yakiniku every day.
Muro: Yakiniku every day?
Fukuda: There are no night scenes this time. So filming mostly ended by evening time.
…
Fukuda: We went every day. Really. Whenever it’s evening time, Kento will for sure come to my side and say “Director, where shall we go for dinner?”
Jiro: Wah, he’s cute.
Uchida: So cute!
Someone: He’s really cute.
Fukuda: Beside me, he’ll be waiting for me like a puppy =D
Jiro: Kento, by the way, what kind of meat do you like?

After the photo session, they asked Kento and Fukuda to give some ending comments.

Kento: Really, this movie has no evil characters in it at all. It’s a really happy and fun movie, and it’ll make you happy so please watch it, and enjoy it. Yeah…
Fukuda: Please watch and enjoy.
Kento: …er watch it…er^&*(mumbles)…and enjoy it.
Fukuda: LOL.
Kento: Yeah… erm, yeah yeah…. ehh… yeah.
LOL (and my reaction was like Oryo’s =D)
…
Fukuda: Although we talked alot about what we ate etc, we properly did our job. We’ve completed the movie. Eh…such gag movies seldom become hits in Japan… but we’d like this movie to become a hit, with everyone’s help. And if it becomes a hit, we can talk about a Part 2.