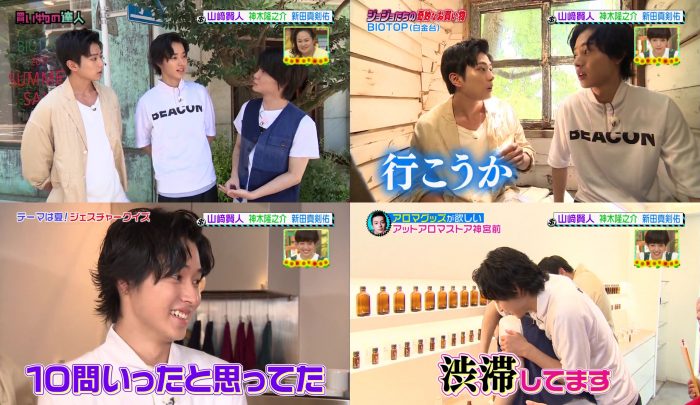 Yamazaki Kento, Kamiki Ryunosuke and Arata Mackenyu was on Kaimono no Tatsujin (Shopping Masters) segment of ‘King’s Brunch’ today. They went shopping for stuff that each of them like…and at the end of the show, that one throw of the ball by Kenken would decide their fate — if they get to keep everything they’ve bought, or if all of it gets confiscated.

Mackenyu made me lol so many times here. He’s really ‘my pace’ ne, so in his own world! And when he said “traditional day”, the other two were like ?? lol. Kento’s “traditional” is cute ne. Kenken’s body over Ryuu in the aroma shop was cute too~ and Macken was like a little puppy jumping onto Kenken (twice!) after that bonus stage charades game fufufu~

I won’t translate everything due to time constraints (have a plane to catch later!), but in the vintage clothes shop, Ryuu said that he only brought jerseys over to Spain. He thought he’d just be commuting between hotel and filming location. So when they went shopping over there, Kento helped him to pick and coordinate his clothes.