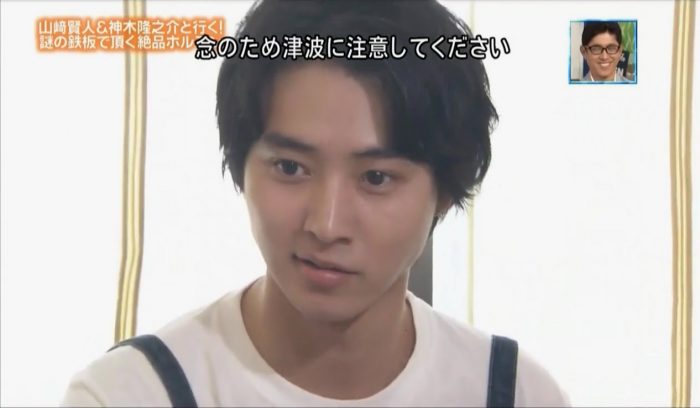 Yamazaki Kento and Kamiki Ryunosuke goes on a ‘JuuJuu’s Exquisite Gourmet” with the hosts of Pittanko KanKan. Ishizuka appears as Josuke and even did a JoJo pose. He calls the movie “JuuJuu” instead, and even have that word printed on his T-shirt. “JuuJuu” is the sizzling sound of meat cooking on hot plate, which brings us to the ‘theme’ of this episode — sizzling dishes.

First, they went to a restaurant in Yoyogi selling Tonjiru. When Kento tried the spare ribs tonjiru, he said “oishii~ (delicious). it’s like spicy tonjiru.” Then Kamiki’s comment after trying the dish, “can I borrow your (Ishizuka’s) famous line? this is mai-u~~~” Immediately, Kento said “I forgot to say that! I wanted to say that!”. LOL [Note: Ishizuka is famous for saying “mai-u~~”, instead of “u-mai~~” (another word for ‘delicious’). Kento has said it in various programs as well, like during the Orange making, and even an English version “cious-deli~~” in Another Sky]

Next up was a Maguro restaurant in Nagano. Looking at the sizzling maguro on the hot plate really made me drool… Kento seemed to be having a good time scooping all those maguro with the spoon lol.

The last stop was a teppanyaki restaurant in Shibuya. They asked Kento to take a peek at the teppan (iron plates used for grilling the food) when he entered the shop, and he said “they have strange teppan”. The plate is indeed kinda strange — it’s not only tilted at an angle, but it has a hole at the bottom, to collect the oil from the cooking into a bowl.

When Kento was about to try the “tankori” (throat)…

Ishizuka: Will your voice change a little after eating this?
Kento: Perhaps.
Ishizuka: What voice is it now?
Kento: Now it’s Yamazaki Kento.
Ishizuka: Try saying “GREAT da ze!”.
Kento: “GREAT da ze!”.
(eats the tankori)
Kento: (in a deep voice) “GREAT da ze!”
*LOL*
Azumi: It’s okay. You don’t have to push yourself!
Azumi: The voice actor Kamiki-san is here you know.
Kamiki: No, no, no.
Azumi: You did “Kimi no Na wa”, and even ghibli productions…
Kamiki: This time, I play Hirose Koichi, and I don’t get to say “GREAT da ze”, but I wanted to say it. Can I?
Kento: Please do so.
Kamiki: Well, this is before I eat. “GREAT da ze!”
(eats the tankori)
Kamiki: “GROO—”
*LOL*

When I saw the horumon sizzling on the plate, I was drooling again. The more food bangumis Kento goes on, the longer my to-eat list lol. Anyway, seems like both our Josuke and Koichi are nekojita (someone whose tongue is overly sensitive to heat) =D