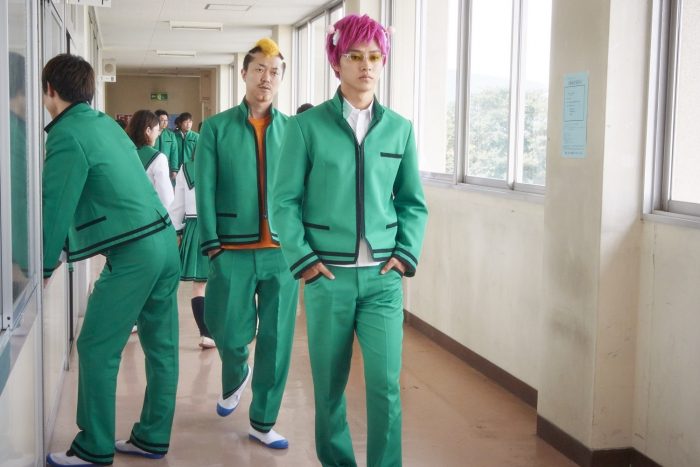 We have new Saiki stills today, and some interesting tidbits on the casting and filming. This day, they were filming the scene where Saiki’s class prepares for the “interesting rock display found in school” item that would be presented during the school festival.

The author of the original manga Aso-sensei also visited the set. Apparently he drew Teruhashi based on Hashimoto Kanna so when he saw the ‘real life Teruhashi-san’, he was so nervous that he forgot to give the “offu!” reaction (that Teruhashi would have wanted from every guy lol). He was so touched by Nendou’s butt-chin make up too. Later on, he took a kinen photo with Director Fukuda, Kento-kun and Kanna-chan.

It’s a monologue for Saiki in the original manga, as he uses telepathy to communicate with people and basically sends his words straight to their heads i.e. he doesn’t talk. In the movie too, Saiki’s “inner voice” is used. However for scenes where they look at each other and exchange words, it’s difficult for a live action to have only one person do the talking, so for those parts only, Director Fukuda made Saiki talk. For the filming, Kento recorded a tentative monologue on set and the cast acted along with it.

When the camera started rolling, Kento perfectly ate it ‘Shimura way’ and drank barley tea with a straight face. Fukuda recalled with excitement, that the staff around the monitor couldn’t stop laughing, that he didn’t expect Kento himself to suggest that, and finally they could execute the scene perfectly. He said that this is a Yamazaki Kento that no one has seen before.

Why Kento as Saiki?

There was a condition set by Director Fukuda before he’d accept this movie. That’s for Yamazaki Kento to be cast as Saiki Kusuo. In fact, few years back before “Suikyuu Yankees” aired, his wife told him “This boy Yamazaki Kento-kun is really good, so how about doing something with him?” And so, Director Fukuda watched “Suikyuu Yankees” every week with this in mind. Furthermore, on Twitter, he heard from fans that “In a magazine interview, Kento-kun said he wants to work with Fukuda-san.” That was also one of the reasons.

Apparently, his oldest son had always only had eyes for “One Piece”. But one day, he saw the whole collection of “The Disastrous Life of Saiki Kusuo” on his shelf. There were only these two mangas in the room. He took volume 1 and read it, and found it really interesting. While reading it, his wife’s words about Kento suddenly aligned with this piece of work.

After the offer was made, and during their first meeting, Fukuda recalled Kento saying this to him “The other day, I found a pair of green spectacles that’s really suitable for Saiki Kusuo, and I wore it. It looks good on me, you know!” (lol).

This would be Kento’s first lead role in a comedy movie, and Fukuda said of Kento’s potential and charm, “Among those in the recent so-called ‘handsome actors’ territory, he gives off a very raw/fresh feel. I might be wrong but I felt very strongly a kind of naiveness and unpolishedness.”

Fukuda also felt that Kento’s bold acting was probably brought out by his synergy with Hashimoto Kanna. Kusuo basically takes a calm and ‘tsukkomi’ position. He only goes wild in Teruhashi-san’s delusions. Fukuda was confident that Kanna-chan would be able to 100% pull off the ‘faces’ that he wanted for Teruhashi-san, so she was the first one he approached. That was his directing plan, and Kento at first seemed unsure of how far to take it, but when Kanna-chan ‘destroyed her face’ [note: I think it means she successfully manipulated her face], Kento said naively “ah, so it’s okay for me to do it to this extent”. “Kento-kun has good intuition, so it was effortless for him. ‘Is it like this?’, he said and he was already doing it 30% more than what I expected (lol).”

Hashimoto, Arai, Yoshizawa, Muro and Sato will appear in both of Fukuda’s live action movies this summer, “Saiki K.” and “Gintama”. Regarding this, producer Matsuhashi Shinzo said it wasn’t intentional. “Director Fukuda has his own plans with regards to acting. He’d only cast people whom he feels would be able to portray their roles properly. In other words, he’ll keep the people who’ve passed the qualifying mark in the past, and restructures (his team) from there.”

I hope this means that Kento will be able to appear in more of Fukuda-san’s works in the future, and hopefully with co-stars he loves *cough*Suda*cough. Saiki Kusuo no Psi Nan (The Disastrous Life of Saiki Kusuo) opens on 21 October, 2017.