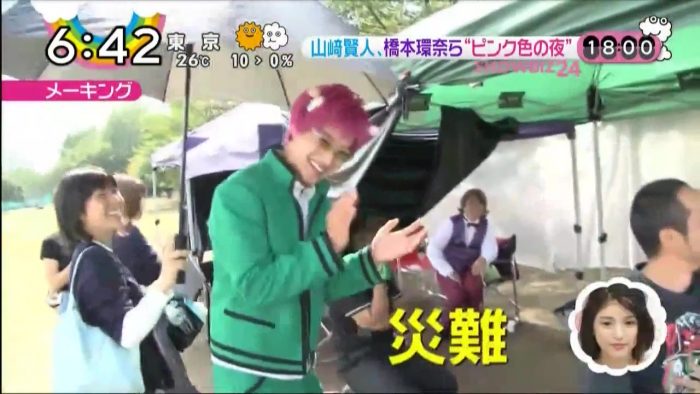 Saiki Kusuo no Ψ-Nan was the first time Kento worked with Director Fukuda, and he talked about the unique shooting style of the director.

Kento: It would be the funniest the first time it’s done, so we film it in only one-take.
Fukuda: We sort of do a test before that, but…
Kanna: “Sort of…” (lol)
…
Kanna: Muro-san and Jiro-san are used to such a shooting style, so they always say different things during the actual take (vs the test), which made me laugh.
Kento: I was trying my best to withhold my laughter on set.

What about Kaku Kento Ponta? He plays Kuboyasu, an ex-yankee who gets angry easily and stares at his opponent with eyes rolled up.

Kaku: But doing too much of rolling eyes isn’t good, right? I got lumps in my eyes. The damage to the eyes is…
Interviewer: You did too much of it?
Kaku: Yes I did. I made this kind of face *shows us the rolls eyes face* and my eyes became puffy and swollen.

Next is Muro-san & Jiro-san, who have been a part of Fukuda Group for years. What kind of disasters did they face during the filming?

Jiro: I took 2 hours to get to the location.
Interviewer: It was so far?
Jiro: Yes, it was. But the filming for my scene only lasted 6 minutes! So it seemed like I went there just to meet Hashimoto Kanna. (LOL) It wasn’t for work, really.
Interviewer: How about Muro-san? Did you face any disasters?
(And the people in the studio started guessing what that disaster was…)
Muro: I was filming in a school, and there were many high school students from nearby schools that came to watch. There was a rumour that “Yamazaki Kento is here” so many of them came. But when they saw that I was the only one filming, they went “What the…” and left.
Interviewer: That must have hurt.
Muro: It was a disaster…that left scars in my heart.
Jiro: They really said “What the…” right?
Muro: Yes, they were, and said it such that I could even hear it! Like *acts as the students* What the… It was so cruel…