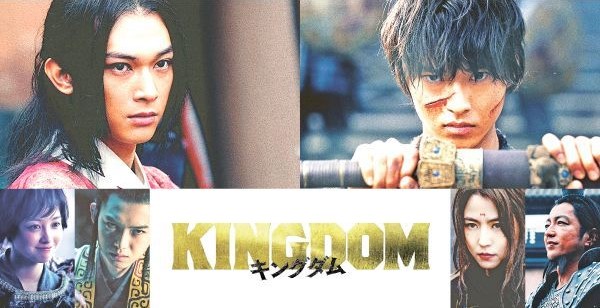 ◆What were your thoughts after watching the movie?
It has always been said that it’s impossible to adapt ‘Kingdom’ into live action, but what I saw was a perfect motion picture that was really flawless. Not only the cast who played the main characters, but the extras who were involved in the fierce battles, the buildings and sets and props, down to the minute details. It shows the passion put in by the production crew. I’ve said it in so many interviews before, but when I watched the draft version, I cried 5 times.

◆Which scene left the deepest impression?
The scene where Hyou died. Actually before filming this scene, I had the chance to have a good talk with Yamazaki Kento-san who played Shin and Yoshizawa Ryo-san who played Hyou. I told them directly that “Hyou’s death plays a very important role in what takes shape in Kingdom later. So I hope that you’ll do your best to capture the audience hearts in this scene.” After that, when I watched the actual scene, both their acting in it far exceeded what I imagined. I was really happy and couldn’t stop crying.

◆Which actor/actress and his/her acting are you most attracted to?
Indeed it’s Yamazaki Kento-san who played the main character Shin. Before this, I had the impression of him being a handsome actor, but when I met him for real, he’s an honest and straightforward young man. It didn’t matter if he were the lead or not, the staff and cast were always going ‘Kento! Kento!’ and ‘Shin! Shin!’, he’s so well-loved by everyone, that I fell into the illusion that Shin was really there. Every bit of his acting is packed with his humanly charm, and while I was watching the movie, I felt that I really wanted this Shin to be happy.

◆When you took part in the script, what kind of requests did you make?
This time the story tells up to the 5th volume, but obviously all of that can’t be packaged into a 2 hour story, so it has to be rewritten. If they were to be considerate of me, there’s a possibility that the story would lose its effectiveness as a movie, so I joined the script team and took the lead to rewrite the script. I requested for some characters and scenes to be cut out from the story, and on the contrary they tried to stop me every time.

◆From your point of view, what’s the thing to look out for in the movie?
The feel of the entire ‘Kingdom’ manga world was brought out intensely in the movie. To simply enjoy the presence of such a world. Also, there’s a movie original scene and dialogue that’s shown during the climax of the story. It’s one that’s filled with the essence of ‘Kingdom’, so even fans who’ve already read the manga will be able to enjoy it.