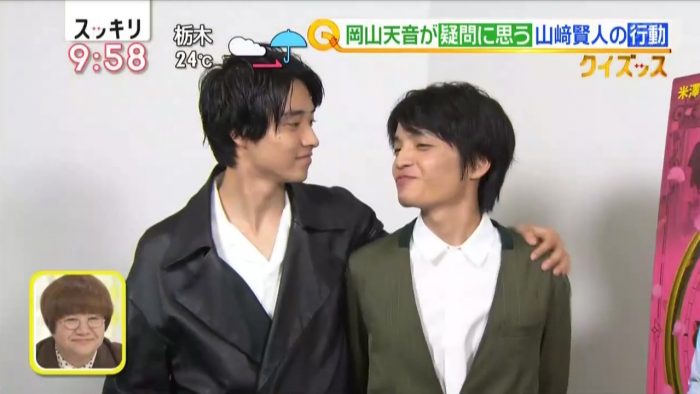 Okayama Amane has doubts about a certain action of Yamazaki Kento.

Amane: I often go with Yamazaki-kun to buy clothes, but for every single piece of clothes, he would entrust me with the decision of whether he should buy it or not. It’s not to the extent that I want him to stop doing it, but it keeps adding up and I get stressed about it.
Kento: There was once he really flared up at me. I was like “Should I buy this? How is it? Is it cool?” and he went like “Stop it already!!!” “Why are you asking me? It’s your clothes right!”
Amane: Isn’t it strange? Why do you do that?
Kento: Well, Amane is fashionable, and I have great trust in him, so… *puts his hands on Amane’s shoulders” Right?
Amane: …Then from now onwards, please continue to ask me.

Question: “Hirose Alice entered showbiz after she was scouted during a festival when she was in elementary year 6. When she was scouted, the scout then was shocked. Why is that so?” The guests in the studio tried guessing the reason, and Paruru got it right, which is…

Alice: He thought that I was a boy.
Kento: *giggles*
Alice: What is it?
Kento: What was going on?
Alice: I was in the basketball club, and my hair was really short cos it was getting in the way… Probably shorter than Kento-kun’s. And it was a festival so I was wearing a jersey. My good friend who was walking beside me was wearing a jinbei (summer clothes for men) although she’s a girl, so we totally look like boys.
Amane: Eh when did he realize that you were a girl?
Alice: He asked for my name, so I said my name and he went “Eh!? Are you a girl?” and I replied “Yes, I’m a girl.”
Kento: I thought I was mistaken when I saw the picture just now. I thought she’s a boy who’s a half (bi-racial Japanese). And a handsome one.
Alice: (lol) Thank you very much.

Alice really looked like a pretty boy in that picture ne!