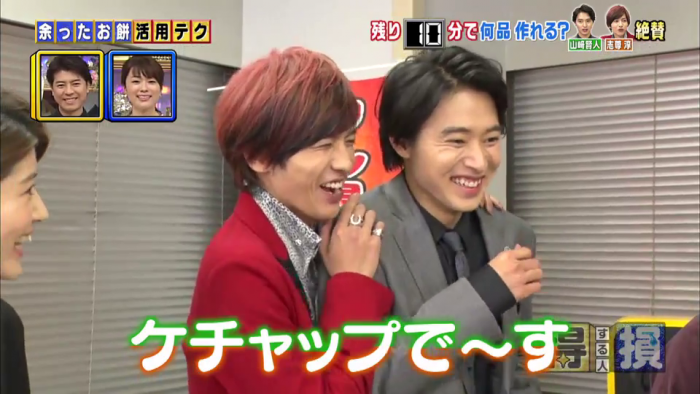 Yamazaki Kento and Shison Jun only had 30 mins to spare to film this program, including the time to eat. They chose mochi as their main ingredient, so Urutokuman had to cook as many dishes as possible using mochi within the 30 mins.

Here we found out that Kento calls Shison Jun “JunJun” – Kawaii ne:) They were asked if they cook often. Kento said seldom, but Jun said he does sometimes, like when his friends come over, he’d make things like tonpeiyaki. Question: have the two of them gone drinking together before? “Not yet.” “We haven’t drank together yet.” Ahh I think they will soon (if not already~).

The first dish was ready, and they were invited to sit at the table to eat. They said “delicious!” at the same time, like twins:) Kento seemed to have lost some weight from filming recently ne, probably no time to eat? So it was nice seeing him munching on the food! His sudden “hot!” was funny!

My favourite part was when Urutokuman was asked what it was that he was pouring over the pizza, he replied ‘ketchup desu’ (it’s ketchup)…and the boys probably found it amusing, cos immediately Kento turned to Jun and they both imitated the “ketchup desu!” and started laughing LOL

It was also funny towards the end, when everyone was just focusing on Kento and Jun, and nobody paid attention to the cooking… until there were like 30 seconds left. But they were really rushing for time ne. The drama staff told the bangumi staff that Kento and Jun had to return to drama filming… but Jun was like “just one more bite, please!” lol. And after a while, she started to ‘chase’ them again. After having a taste of the last butter sukiyaki dish, they left the show and headed back to the drama location.