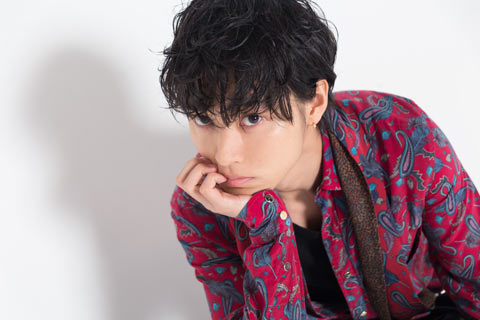 ――A live-action version of a popular manga with fans throughout the world, being the lead actor of such a movie, what kind of feelings did you have leading up to the filming?

Yamazaki: This being a major project, there was huge pressure without a doubt. On the other hand, I wanted to work with director Miike Takashi, so I was really excited about it too. In any case, with love and respect for the original work, I decided to take on the challenge and portray the role. ――When you first read the script, what impression did you have?

Yamazaki: It included the stories on Angelo (Katagiri Anjurou) and the Nijimura Brothers, and the tales of youth and humans written in the script were faithful to the original work, was what I felt.

――How did you feel about your role of Higashikata Josuke?

Yamazaki: I was pretty troubled over what I should do to bring the character that I read in the manga to reality.

――What do you feel is Josuke’s charm?

Yamazaki: He’s cool, and has a sense of justice. He respects and looks up to the person who saved his life, and was influenced by his hairstyle and dressing. Josuke’s “kindest and most peaceful Stand in the world”, Crazy Diamond, also reflects his character.

Yamazaki: The Joestar family have large bodies. To get as close to Josuke’s body as possible, I started training about 6 months before the filming, to build up my body. ――Did you feel that there are parts of Josuke that are similar to yourself?

Yamazaki: I guess it’s the feeling that “Whatever happens, I definitely will not break, I won’t ever break.”

――Would you also not break from the fan reactions？

Yamazaki:  Seems like I’d break (laugh). Of course I’d try my best not to, I’d like to face their response squarely.

――Filming was mostly in Sitges, Spain for a month and a half. How did you feel about it?

Yamazaki:  I thought it’s a town that’s perfect as the Morioh-cho that’s drawn by Araki-sensei. Even if I walk the streets in Josuke’s hair and outfit, I didn’t feel isolated. I felt that the world of JoJo was reproduced perfectly. ――How was it like being part of the Miike group?

Yamazaki: There was a good atmosphere on set. We actors were motivated and given a lot of freedom to express ourselves. We felt like we were trusted, and Director Miike was enjoying himself very much on set, so it made us enjoy ourselves as well. Yet, without any prior planning, from the testing to the actual take, the concentration and focus on completing it in one take was really high. It was a truly comfortable set.

――How was the JoJo depicted by Miike group? Was there an episode involving another cast that was memorable?

Yamazaki: I felt that a JoJo under Director Miike would show the strength of men. Before the crank in, Takayuki-san who plays Angelo said these kind words to me “This (to you) is gonna be like ‘Crows Zero’ to me, so do your best!” ――When you saw the completed movie, honestly what kind of feelings did you have?

Yamazaki: I could feel the world of JoJo. I was thinking how would the Stands be, but they turned out to be really cool and I could feel everyone’s enthusiasm from it. When the Stands first appeared, I was touched, “Crazy Diamond is awesome! Star Platinum is awesome!”.

――You watched the movie together with the audience at the 17th Neuchatel Fantastic Film Festival in Switzerland right?

Yamazaki: I made many discoveries watching the movie together with a foreign audience, like “So they laugh at such a scene!”, and there were people who laughed at stuff that only JoJo fans would understand. It once again reaffirmed that this work is indeed something that’s well-loved in the world. I’m also really glad that the audience chose the movie for the People’s Choice Award.

――How was it like acting opposite Kamiki Ryunosuke-san who plays Hirose Koichi?

Yamazaki: He’s someone I’ve seen on TV since young, but he was friendly from the start and we became really good friends. He’s a year older than me but he’s a really cute guy (lol). He’s smart and deft, and he knows many things that I do not know, so he was really easy to approach for advice.

――Lastly, what’s the highlight of the movie?

Yamazaki:  I love all the scenes, but I’d like viewers to feel the power of the Stands, and also the human drama aspect like the friendship between men.