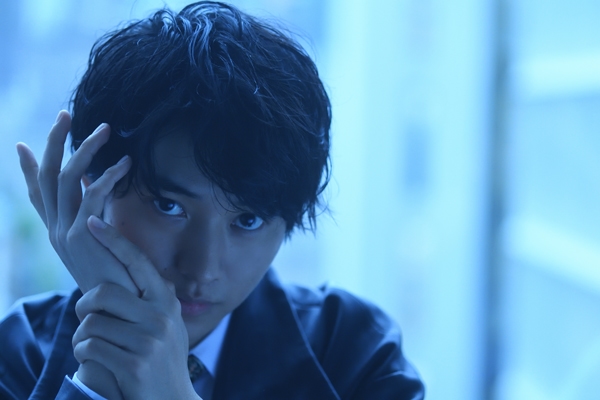 ―― You play Oreki Houtarou, a high school student with an energy-saving motto in movie『Hyouka』, but what are the similiarities you have with your role?

Hmm, to be honest, I didn’t really enjoy it. As I quit soccer in 3rd year of middle school, I didn’t join any clubs in high school, and I was working during high school…. Thinking back, perhaps I didn’t really like school. Things like school rules etc. felt rigid. On the contrary though, now I feel like 「I want to go to school」.

―― Well then, from an audience perspective, your high school life is unexpectedly quite similar to Houtarou’s?

Perhaps. I started this job when I was in first year of high school, so I hardly went to school. Then, during that period, cliques were already formed in my class. I didn’t have any good friends there, and now that I think back, my high school life was probably a period of darkness. It was like, I didn’t want any problems, and just wanted to obtain enough credits (to graduate). Among all of that, what I was absorbed in and worked hard for, were soccer and work. ―― From your first year in high school, did you enjoy your work?

―― Was there something that sparked that change?

It was at that time when I was thinking hard if I should hunt for a job or further my studies. That’s probably why. After I decided that 「I’ll continue with this job」, acting became enjoyable.

―― Even in 『Hyouka』 your acting was shining. Was there an interesting episode while acting with Hirose Alice-san who plays Chitanda Eru?

Although we acted together before, this was the first time we acted so closely. She’s very open-hearted, loves manga, and we were able to talk frankly, so it was comfortable. This time, I think Alice was also worrying about her role, but during the actual take, she didn’t show that worry at all in her acting, and firmly played Chitanda-san. I thought I’ve to respond properly to that. Here, he talks about his motto in life, about “not drinking yesterday’s water” and to “take action immediately”. Refer to this article =D

―― If you think too much about everything, nothing gets moving, isn’t it?

That’s right. If there were a script that I’ve yet to read, I’ll start reading it even before thinking things like「I can read this tonight too……」! ……something like that. ―― I see. How to put it, Yamazaki-san, from your answers, we can feel that you have “mental strength”. Even in romance, are you the type that will firmly lead the girl you like?

I don’t think I’m the type who would lead. Ah, but when it comes to what shops we should go to, I’m probably more assertive.

―― If, even if it seems like there’s no hope for you towards a girl you like, will you still be able to attack (get close to/chase)?

―― To attack even though hope is low, not everyone can do it yo! You’re strong.

No, I’m not. Even towards a girl I’m going out with, I’m probably the type who don’t really put on a strong front, and will show my weakness. This was Yamazaki-san who talked about 『Hyouka』 and himself amidst his busy drama filming schedule. His views on work and love gave us a feeling that he is mentally tough, but when we told him that he said 「That’s not true. I also have my weak points.」. But, for someone who’s able to show his weakness to others, and being humble, he does possess “strength” in its true sense. Doesn’t this show that such a Yamazaki-san is 「the strongest man at the moment」?