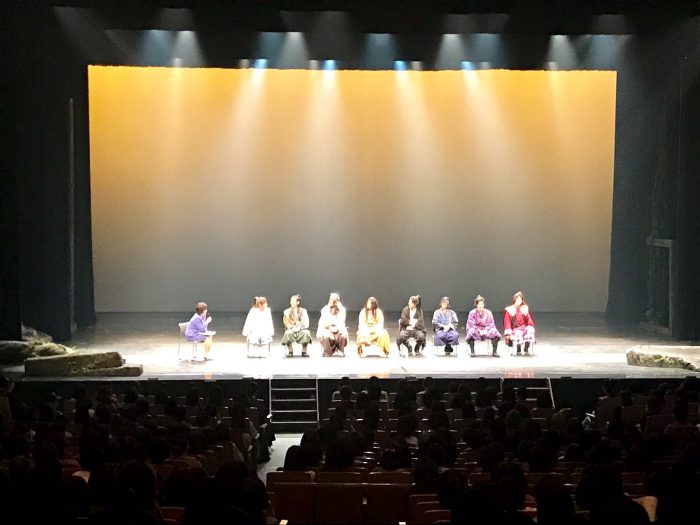 Some fans who attended shared their reports on the post-show talk session of Satomi Hakkenden 2017 in Hiroshima on 16 May, and I’ve translated some bits here.

About Matsushima Shota
Matsushima: Everyone, can you see me as a female?
Audience: *applause*
Rest of the cast: Ugly hag! (lol)
Matsushima: Kento, what is it that you’re calling me recently?
Kento: Horse! (lol)

And they decided to use the hashtag #松島可愛い (#matsushimakawaii) on SNS.

Kento’s greeting
Kento: Yesterday, I was with Wadango–
Wada: Wait, if you say ‘Wadango’, nobody will know who it is (lol)
Kento: Ah, it’s Wada and Kobungo hence ‘Wadango’. I was with him and Acchan, and–
Arai: Hey, I’ve known you for so many years but this is the first time you’re calling me ‘Acchan’! It’s creepy (lol)
K: Ah, with Atsushi (lol), and also Nishime. We did some sightseeing, and Hiroshima is really a great place with a long history.

About Kento’s hardships
[Everyone said Kento had a hard time]
Kento: No, well, it’s not that… *thinks hard* hardships are fun too!
Wada: No, Kento had it hard, didn’t he?
Tamaki: You know, Kento ne, even if he’s having a tough time, he doesn’t really show it on the outside.

About Kento’s ‘miss’
There was a scene where he had to throw the crystal ball away. It was dark and he couldn’t see well, and somehow after throwing it, the ball came rolling back to where he was lol. When talking about this incident, Kento stood up and reenacted the scene lol.

Final greeting
Kento: Everyone, really thank you so much for coming today! There are 8 more shows to go! Kakukaku… [note: he probably wanted to say 各々 which means ‘each’ and pronounced as ‘ono ono’, but what came out was the literal pronunciation of 各 (kaku) instead]
Audience: ? *murmurs* *lol*
Kento: Kakukaku shikajika… [note: deliberate gibberish, like “blah blah blah…”]
Kento: Each area that we visit, safety is most important! We hope to deliver our passion live to you, so please support us!! Well then– *stands up* [and he was the only person to do so lol]

[After rest of the cast stood up]
Kento: Everyone in Hiroshima, thank you very much!!!

One thought on “Translation of fan reports on Hiroshima after-talk”