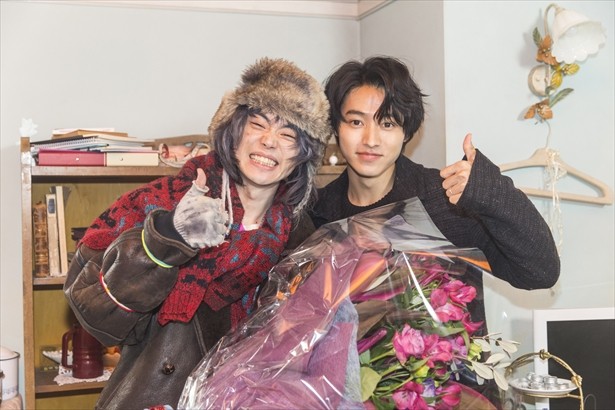 *Warning: contains spoilers up till Ep9* The last scene that Suda filmed was a scene from the last episode. It was an important scene where Harumi suddenly appears in Saiko’s room in front of Outarou who was grieving over her death.

This day too, Kento & Suda were in high spirits since morning. During the rehearsal, after one of the lines Suda said ‘well then, a question for you”, he added a sound effect “teten~♪” as though it were a quiz show, which made the staff laugh. As that sound effect fits the character of Harumi, it’ll be used as it is. Furthermore, Kento showed an exquisite expression to something he realized after listening to Harumi’s words, and that also made the staff laugh. It was a relaxing mood on set from the start.

After the rehearsals, Kento and the staff congratulated Suda for winning the best actor award at the recent Japan Academy Awards. It was a warm “at home” atmosphere as they celebrated this good news of a close friend.

Then, it was the actual filming. After a cut of Kento alone, Suda appeared again and they started filming a scene involving the both of them. They listened attentively to the detailed requests made by the director. It was apparent they had good chemistry, as they kept the atmosphere light even though they were filming a serious scene.

During the breaks, they were on the guitar again, Kento was asking “Is it D (chord) here?” and Suda replying “No, it’s D minor.” etc. Suda was seen giving a lecture on chords, just like he did at the start of the drama, which I translated here. When the TV Guide reporter entered the location, she said she heard a ‘flute’ sound. Turns out, it was Kento playing the recorder lol. He played songs like “Twinkle twinkle little star” and the themesong of “Astro Boy” anime. The reporter also noticed that in between takes, they were always humming some tune.

Suda also dived onto the bed over Kento who was sitting in front of the bed! When he saw that, Kento showed a shocked expression. When Kento suddenly started singing “Boku wa ima～♪” (opening phrase of Sayonara Elegy), Suda joined in too. Kento strangely did a vibrato arrangement of it which made Suda laugh, and for some reason they also did an impersonation of Yanagisawa Shingo “Uuuu～♪” siren, etc. Their standby time were filled with smiles and laughter.

However, when it’s time to face the camera, their expressions changed, and being professionals, they finished the important cuts in one take. When the director shouted “OK”, they announced Suda’s crank up! Suda received flowers from Kento, and said “Thank you very much! There are loads of things I want to say… but I’m looking forward to the after-party! (lol) After this, you still have filming until very late, right? Kento said just now that he’ll end it in 3 hours. (lol). Just a little more to go, please do your best! Thank you very much!!” and after that, he suddenly added “I wanted to appear more~!”

Yamazaki didn’t miss hearing that, and he said “Eh, what will you do? Will you come later?” and Suda ‘reprimanded’ him, “You’re jumping the gun again… Remember 『Kayou Surprise』! It was really horrible…(lol)”. After the ceremony, the two of them had arms over shoulders and took photos for memory sake. Since acting together in 2013 drama “35-sai no koukousei”, they’ve been good friends in private and it’s been a while since they were able to firmly act opposite each other like that.

Rest of the photos from both articles: