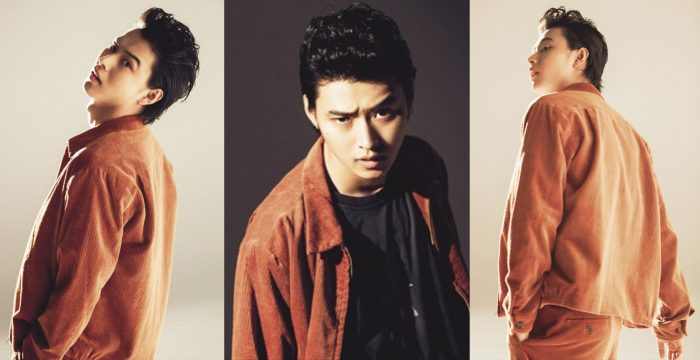 This is the first in a series of 4 “relay interviews” by WEB The Television for JoJo’s Bizarre Adventure movie release. Lead actor Yamazaki Kento is the first to be interviewed, and this article was published on 23 July, 2017. ――Did you gain anything from playing the protagonist Higashikata Josuke in 『JoJo’s Bizarre Adventure: Diamond is Unbreakable Part 1』?

「The ability of acting in a special JoJo-like world, and the competitiveness of confronting each and every scene with all my might. I think these are what I learned.」

I think there was some pressure before the filming started…

「It was really pressure after pressure. The original work is amazing after all, isn’t it?」

――Yeah it’s a world-famous series which sold over 100 million copies after all.

「But that excitement of being able to work with Director Miike and a fantastic cast helped me overcome the pressure and made me stronger.」

――Before the crank in in Sitges, Spain, did you have the chance to talk to Director Miike?

「We spoke several times, for costumes coordination etc. What left an impression was something he said, “I’d like Josuke to have the eyes of a shounen during wartime”. I didn’t ask what he specifically meant by that. I thought, I guess what’s important is what I felt from those words.」

So what did you feel from them?

「That even in a hostile environment, it’s the strength to survive/endure, as well as that loneliness.」

Josuke’s appearance is like a yankee from the past…

「Miike-san also said that. “From his appearance, he looks like nothing but a delinquent” (lol)」

――When you first wore Josuke’s clothes and hair, what did you think?

I thought “With this, I can do it!”, however before the hair set was completed, it was a tedious process of trial and error. How it was done is an industry secret though (lol). When I saw that massive Josuke-ish fringe, I got fired up. I was asked if the fringe will get in the way during action scenes, but I had unexpectedly gotten used to it. At first when I looked upwards while facing down, my view was a little obstructed, but naturally I shifted my vision and I was able to see clearly.」

――A live-action adaptation of the manga series had been deemed impossible, but was there an aspect of acting that you challenged for the first time?

「How we should be showing Stands, and how we should be moving around…these were unknown territories. The Stand movements were in the storyboards, and during the rehearsals we had stunt doubles to act with us. Like they would make the punch move from behind me, timed to the movement of my arm. It made it easier for me to imagine, and it was enjoyable. But for the scene where I fight the enemy Stand, when and from where the enemy Stand comes attacking me was based on my imagination.

――During the filming, what kind of instructions did Director Miike give?

「Miike-san demonstrated the special moves himself, and tell me things like “When the other party does this move, Josuke will counter attack this way like ‘DORAAA!'”. At the end of takes, I’ve seen him giving me the thumbs up sign many times. That might also mean “Way to go!”, but I also feel that he might be trying to say “There’s more to be done.” to fire me up. Miike-san is someone who always motivated his actors to act freely. That’s why when the filming wrapped up, and Miike-san said “That was cool. This is going to be a good movie.”, I was extremely happy.」

――Didn’t this star-studded cast inspire you greatly as well?

「Of course it did. Iseya-san who’s very friendly on normal days too inspired me a great deal as Jotaro on set. Macken made Nijimura Okuyasu his own. I thought the way he moved around freely on set was awesome. Ryuu is indeed a prolific actor. He’s really deft in acting someone back in time. Takayuki-san was really caring to me. During the announcement press conference, he gave me a pat on the shoulder and told me “This movie (to you) is gonna be like ‘Crows Zero’ to me, so do your best!”. Even during the filming process, he stayed with me to practice until the actual take. I was really happy.」

――The movie release date of 4 August is drawing near…

「Now I’m waiting excitedly for the release. I think it’s a work that shows the greatness of Japan’s CG. When I first saw the completed film and the Stands come alive in the movie world, I was really touched. Everyone involved in the movie truly respects the original work, and places emphasis on everything from script writing to the way our acting was filmed, the creation of the Stands and even down to the minute details of the sets. All of those are packed into a JoJo-like world. On top of that, isn’t it apt precisely because it’s portrayed by humans? I hope you’d be able to enjoy an unpredictable JoJo all the way till the end roll credits.」

More photos from the article: And I like this still from the movie – of Josuke and Jotaro (Iseya-san).