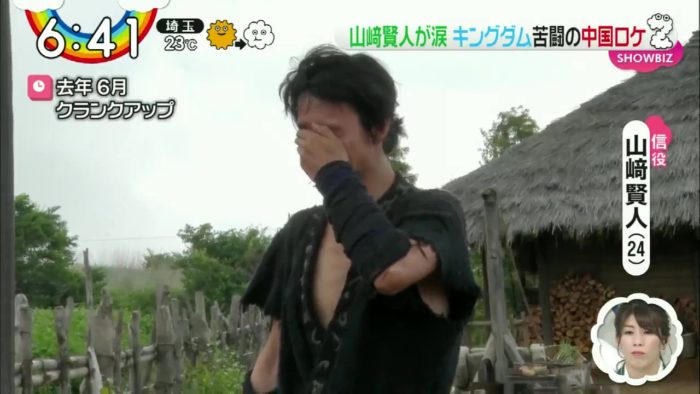 Here are vids shared by harimoto66-san, of the Kingdom behind the scenes coverage aired on ZIP! this morning. They were filming the scene where they ate heartily after running away from enemies. They made the dishes using the oldest recipes in China, but they tasted like “what present-day people like” (according to Kento ^^). That short couple of seconds of Shin stuffing food into his mouth was priceless.

The set in China is about 17 times the size of Tokyo Dome, there were 10,000 locals who took part as extras, and 100 horses used in the filming which took place over a period of 20 days. Kento asked Kanna and Mitsushima how’s life in China? And Kanna said they’ve kinda gotten used to it already. Seems like Mitsushima got used to it from the start. Apparently he was able to communicate with the locals… even though he was totally speaking in Japanese lol.

Finally, as shared on Twitter just now, a translation of Kento’s crank up speech after two months of filming in both China and Japan…

Yamazaki Kento's crank up for Kingdom 😭😭😭
— from ZIP! 2019.04.05
"I challenged this with my heart and soul, so I can't believe it's ended… There's still a bit more (editing etc.) to go, so please do your best! Thank you very much!" pic.twitter.com/y55ooykdPi

We’ve never seen him this emotional during any of his movie or drama crank ups so far ne… This is the first time — and I got a feeling it’ll be the one and only time — we see him crying outside of filming. Seeing the usual happy go lucky, cheerful, bubbly Kento break down like that pains me… Honto ni otsukaresama deshita! I hope he had good beers after this!