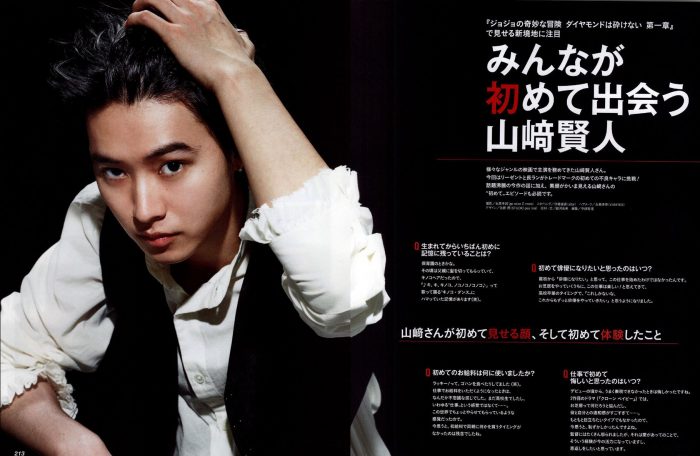 The Q&A on many of Yamazaki Kento’s firsts is really interesting, so I’ll be translating that only – pages 2 & 3. The last page is on JoJo which has been translated before, so I’ll skip it =D Q: Since you were born, what’s your very first memory?
A: When I was in nursery school, my father cut my hair for me, and as it was a mushroom (kinoko) hairstyle, I was going “♪ ki, ki, kinoko, noko, noko, noko, noko ♪”, singing and dancing this kinoko song. I remember I was very much into it (lol).

Q: When was the first time you thought you wanted to be an actor?
A: At first when I started doing this job, I didn’t think “I want to be an actor”. While acting, I thought “this job is so fun!” and at that kind of timing, I graduated from high school, and thought that “This is the only way for me. I want to be an actor from now on, forever.”

Q: What did you do with your first salary?
A: I thought “Lucky!” and used it to eat (lol). To get paid for work done, somehow it felt kinda strange. I was still a high school student then, so I couldn’t feel what was so-called “work”…. It felt like it was something I was kinda allowed to do in this (showbiz) world. Thinking back now, I regretted not using the timing of my first paycheck to buy something for my parents.

Q: When was the first time you felt “This is frustrating/vexing!” in your job?
A: Around the time when I debuted, when I couldn’t express myself well, I felt frustrated. In my second drama (Clone Baby), I was troubled about what acting is, the difference between the role and myself was too huge…. By nature, I’m not the type who likes to stand out. Thinking back now, I was probably feeling embarassed. I was scolded a lot by the director, but that was done out of love, and such an experience moulded me today, so I’d like to return the favour.

Q: When was the first time you felt that you’ve become an adult?
A: When I felt that beer was delicious! (lol) After I turned 20, I thought “Sometimes it’s delicious, but it’s still indeed bitter. Maybe I’ll just have one glass.” But from some time last year, it has become “Delicious! The feeling of beer going down your throat is da best!” (lol). Indeed, beer tastes really good after work ne.

Q: Recently, what was something that you experienced for the first time?
A: When I went to Hokkaido in February this year, I saw diamond dust. There are stuff like snow crystals sweaters right? When I saw it for real, it was just like that. The rustling snow crystals, when I saw them with my naked eye, I was really moved.