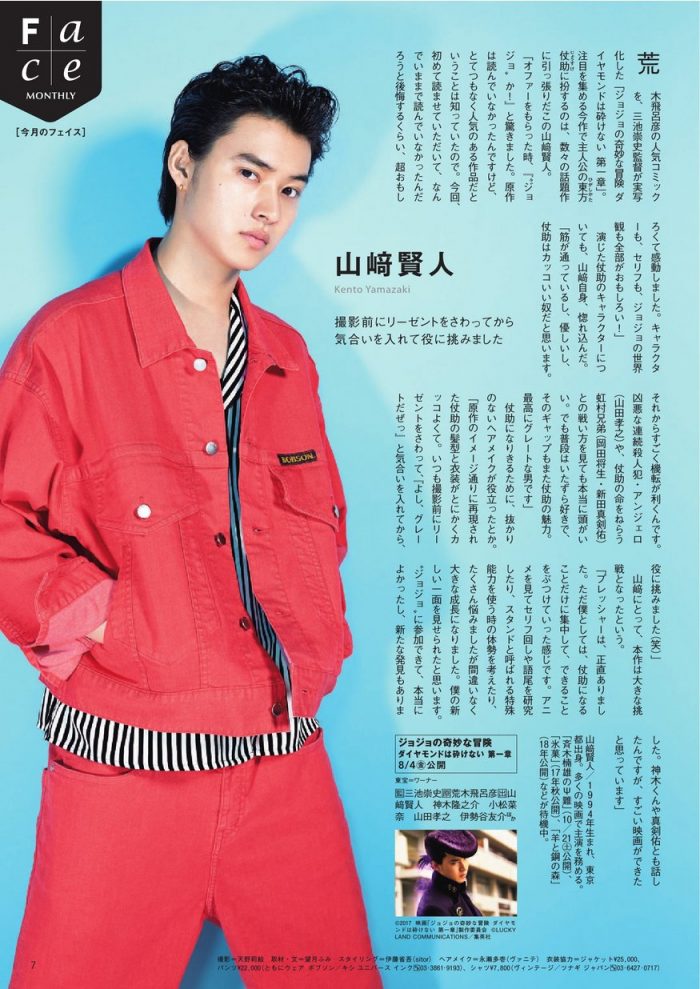 This is Yamazaki Kento’s page from Toho Cinema’s free magazine, which is also available on the Toho Cinemas App. Click for high resolution. When Kento first received the offer, he was shocked. “JoJo ka!” Although he hadn’t read the manga then, he knew what JoJo was cos it’s really popular. He then started reading the manga and regretted not reading it before lol. He found that everything in the JoJo world, from the characters to the dialogues, was super interesting.

He fell in love with the character Josuke, who is physically strong yet kind/gentle and cool. Josuke is a very sharp guy whose intelligence shows when he fights Angelo, Nijimura Bros, etc. But when he isn’t fighting Stand users, he’s mischevious and loves playing pranks on others. “That gap is one of Josuke’s charms too.”

To Kento, this role was a huge challenge. “There was pressure, to be honest.” But he concentrated on becoming Josuke, doing whatever he could. He watched the anime too, and researched on the tone/pitch and how to deliver the lines, as well as the body postures to make when using his Stand. He was worrying about many many things, but without a doubt, he has grown alot. He feels that he has shown a new side of him. He’s really glad to be part of JoJo, and has made discoveries along the way. He has talked about this with Kamiki-kun and Mackenyu too, but this movie is a killer.