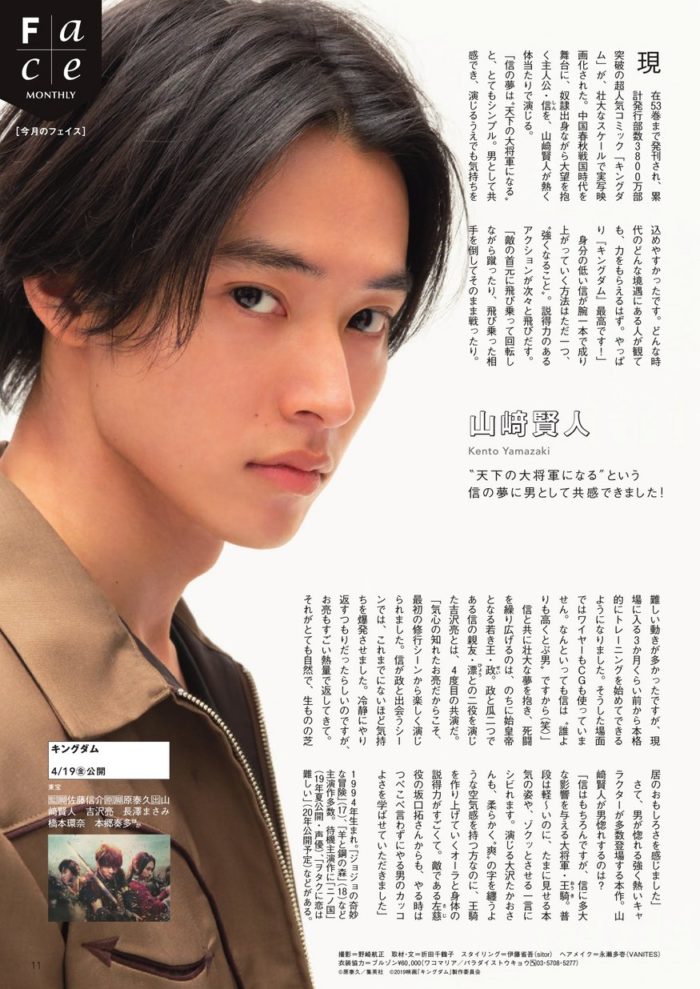 The mega-popular comic “Kingdom” which has published 53 volumes and sold over 38 million copies to date has been made into a live-action movie on a grand scale. The story is set in the Spring and Autumn Warring States period of China, and Yamazaki Kento plays the lead character Shin, a slave boy with a huge dream.

“Shin’s dream is very simply to become a ‘Great General under the Heavens’. As a man, I’m able to relate to this, and hence able to get into the role easily while portraying him. One should be able to gain strength whichever period or situation you are in. Kingdom is indeed the greatest!”

There is only one way for Shin, who has a low social status, to rise up, and it is to “become strong”. “I have to jump at the enemy’s throat and step on him while making a turn, jump and bring down the opponent and continue fighting, etc. There were many difficult moves to make, but about 3 months prior to the start of filming, I started full scale action training so that I would be able to do those scenes. We didn’t use wires or CG for those scenes. ‘Cause after all Shin is “a man who jumps higher than anyone else” (lol).”

About Yoshizawa Ryo who plays two roles in the movie –Sei, the young King of Qin who holds a huge dream like Shin and who will become the first Emperor of China (Qin Shi Huang), and Hyou, Shin’s best friend who looks exactly like Sei– this is their 4th time acting together.

“It’s exactly because I’m close to Oryo, that I was able to enjoy filming the sparring scenes at the beginning. In the scene where Shin met Sei, he made me let go of emotions I’ve never done before. Oryo too, he wanted to respond in a calm and composed way, but ended up coming back at me in a energetic way. It was all very natural, and I was able to experience the fun of such raw kind of acting.

There are so many powerful and passionate characters in this movie that even men will fall for. Who does Yamazaki Kento fall for?

“Shin is definitely there, but Great General Ouki too who has a huge influence on Shin. He might be very casual and seem to take things lightly, but that moment when he gets serious, or when he freaks you out with that one line he says, I get goosebumps all over. Osawa Takao-san who plays him too, usually he’s gentle and has a “refreshing” air around him, but when he plays Ouki, his convincing build and aura are amazing. I have also learned from Sakaguchi Taku-san –he plays the enemy Saji– the suaveness of doing things without complaining (he’s a ‘no ifs and buts’ person).”