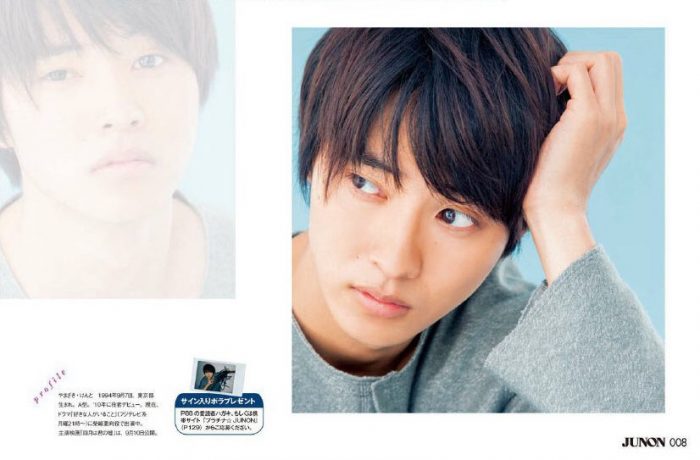 Kento: The last time I acted with Taishi was in “Suikyuu Yankees”. So before the filming started, I contacted him on SNS, “This time we’ll be acting together ne~”
Taishi: “Are you playing the piano?” “Yes I am~” (lol)
Kento: Because Taishi acted with Hirose Suzu and Ishii Anna before, I thought he’d be the go-between, so I said “I’m counting on you~”
Taishi: But I didn’t do anything, and everyone became good friends really quickly.
Kento: Many of the scenes I have with Taishi were on the rooftop, it was interesting.
Taishi: Kento and I seldom have serious talks with each other, but during the filming, we had many serious scenes together, so we had to really adjust and switch our emotions…
Kento: When it’s time to have fun, we had fun, but during the filming, we had to tackle the scenes seriously. We were already good friends to begin with, so it was great that we got to play best friends too.
Taishi: For our scenes, we didn’t need to talk about it much, but once on set, we could naturally bring out the atmosphere.
Kento: It was fun ne.
Taishi: I thought that Kousei was really fitting for Kento. On set, even if he weren’t forced to switch emotions, he was Kousei himself. Because, isn’t Kento someone who arouses maternal instincts?
Kento: Who said that? (lol)
Taishi: Readers! (lol) Kousei is cute when he’s indecisive. As Watari, I also feel the same.
Kento: Taishi is in actualty the reliable type, so he fits the role ne. Watari says good stuff from time to time, but even if Taishi doesn’t have that kind of weird “I say really good things” air, he’s a natural fit.
Taishi: But you know, the two of us always imitate and say each others’ lines behind the scenes, now that I think of it, that wasn’t a good thing to do ne (lol).
Kento: Yeah it wasn’t! (lol)
Taishi: When that scene really came, we would just feel like laughing (lol)
Kento: And we were also enjoying classical music that we don’t usually come into contact with (lol)
Taishi: Kento, it doesn’t feel at all like you are older than me.
Kento: Me too, it doesn’t feel like you are younger than me (lol)
Taishi: Although we are 4 years apart, we are like friends from the same hometown, so it’s comfortable.
Kento: Usually I do not really know how to connect with people younger than me, but I didn’t have that issue with Taishi. When we first met too, we talked about “Although I’m older in age, Taishi is more senior in this industry. Taking the middle of both, we become ‘douki’ (same year)?” (lol)
Taishi: We really match each other when we’re together ne. But to the people who are reading this, is it really okay to say such things?
Kento: This is bad. The way we are usually, we won’t be able to have a proper crosstalk (lol).