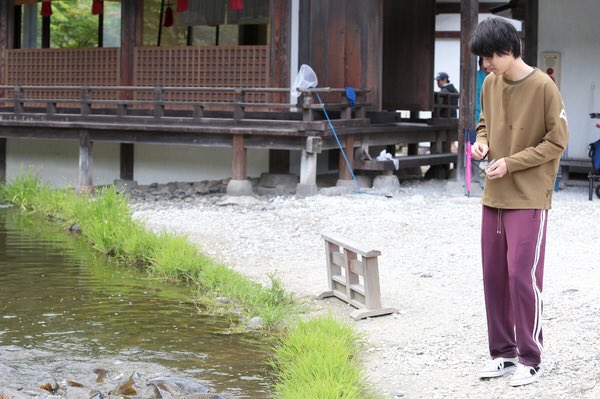 The CM was filmed at Fujiwara Heritage Park (Oshu City, Iwate Prefecture), a theme park built initially for the filming of an NHK period drama but now also open to visitors who want to re-live the Heian period. Kento said “It’s as though I’ve come to the Heian period, it feels intensely real.” During the filming, Kento also had a good time feeding the koi fishes in the pond. After the filming, Kento said “This time, I time travelled to the Heian period, and have that fateful encounter with Murasaki Shikibu who looked exactly like the girl who dumped me. Everytime, whenever I film something, I have that once-in-a-lifetime encounter with people, and I feel that those are also important and fateful moments. In the CM, Wataru has the strangest of experiences time-traveling with a smart phone in one hand, and meeting various historical figures. I’d be glad if you could watch over him and how he matures.”