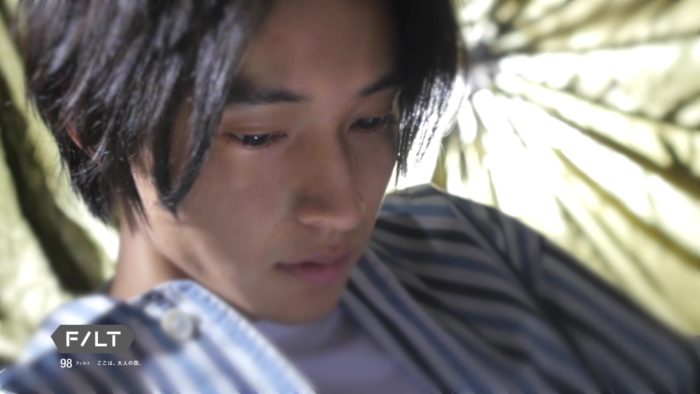 His appearance is serene, crisp and clear all the time. In a good way, he’s colourless, transparent. Be it a pure pediatric surgeon, a psychic or a fighter in the warring states period, we’re starting to understand why he was able to blend into his roles.

He plays the main character Shin in the movie ‘Kingdom’ that’s set in the Spring and Autumn Warring States period of China, BC 245. A wild and passionate character that he’s never done before. The manga it’s adapted from has sold over 38 million copies.

“When I first read the manga, I thought ‘just how far is this guy going to grow up!’. Shin has infinite possibilities and is a straightforward character who chases his dream. That’s why I also didn’t think of anything complicated, and just faced the character straight on with all my might.”

Shin was brought up as a war orphan, and together with his best friend Hyou (Yoshizawa Ryo), they learn their own style of swordfight so that they can realise their dream of becoming the Greatest Generals under the Heaven.

“I wanted to have a rough and wild feel in my action scenes, so I had talks with the director and the action director. But it was very difficult. When I used only rage to fight, I wasn’t able to coordinate the technicalities of the movements. I had a hard time charging up my emotions and doing the movements while thinking of it all in my head.”

Shin jumps higher than anyone. To portray his kind of fighting style, he also tried wire action. He trained together with his fellow cast, and his body became rather buff.

“I lost 10kg after filming ‘JoJo’. Shin’s battle started from the moment he lost Hyou, who should more than anything be with him chasing the same dream. I always kept those feelings with me throughout the entire filming.”

After parting with Hyou, Shin meets Eisei, the King of Qin who looks exactly like Hyou. Shin who bares all his feelings in his actions, and Eisei who’s calm and composed. The acting of these two contrasting personalities is something to watch out for.

“For scenes that require explosive emotional acting, if it’s done according to the rehearsals, it wouldn’t be real. If I gave my all during the test run, I’d not be able to unleash the right emotions during the actual take. The cool kind of acting that’s required of Sei was also challenging in its own way.”

He has acted many times with Yoshizawa who plays Hyou and Sei. Even their breathing during the action scenes were in sync.

“We’ve worked on so many projects together, and he’s someone I can rely on. When we both watched the completed movie, we were saying how badass and how grand a scale it is (lol).”

We hope everyone will watch Shin who keeps growing while fighting the strongest enemies.

“People look up to the Shin-type of characters. I do too. Cause I also feel that it’s important to take action according to the simple feelings you have.”

The original source becomes the most important guiding principle to playing the character.

“The expressions frozen in frames that’s drawn in the manga really helped me a lot while I was playing the role. To read between the frames — the emotions that flow from one expression to the next — and transform it into a form for movie. This is also one of the important processes of adaptation from manga. That’s why I’ll always read the original source without fail.”

The theme this time is “to live the morning”. But, actually he’s not a morning person.

“I can’t wake up. Recently, the first thing I do is to take a bath, to force myself to wake up. I put on my contacts, then drink coffee. Only then am I finally (awake). In fact it’ll be great if I can go run first thing in the morning, but it’s impossible for me.”

24 years old. The “morning” period that’s filled with hope has just only begun. FILT is a free paper that’s available at these locations in Japan.