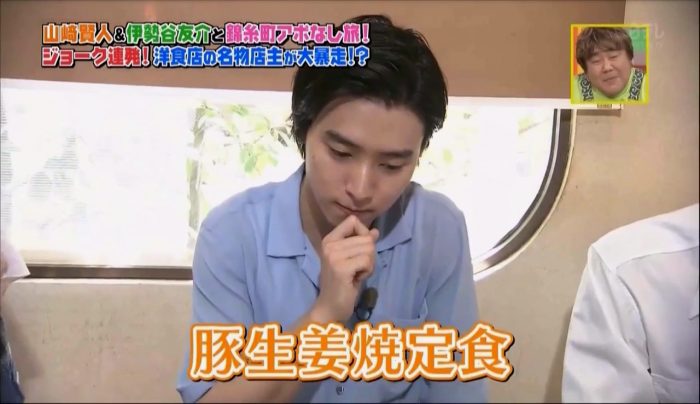 On this episode of Kayou Surprise, Eiji Wentz goes ‘apo-nashi’ with our Josuke and Jotaro-san. This clip was ‘painstakingly’ put together (long story so not going into details lol~) with CMs removed, 720p but quality isn’t fantastic. In front of Kinshicho station, Wentz introduced the guests, Iseya Yusuke and Yamazaki Kento. They would go ‘apo-nashi’ (without making prior appointments) today, hence the three would be asking people for recommendations on the good food in Kinshicho. It’s Iseya’s first time doing the apo-nashi tour, and second time for Kenken.

Wentz was like “First of all, take off your sunglasses!” (to Iseya) lol. When Kento wore the sunglasses, Wentz said to him, “you did this in a summer drama!” (Sukikoto, ne?).

Kento suggested asking OL. Wentz also said they could target the ‘locals’ (people from Kinshicho). So Iseya-san asked a lady “Are you a local?” and she said no lol. Then they managed to get hold of a salaryman, who recommended a restaurant whose owner is a “funny oyaji”.

Outside the shop, Wentz decided he would not be the one asking for permission to film today. So Kento said he’d do it, and he entered the shop to ask. They got an OK, and got themselves seated. Ah, another customer shook hands with Iseya-san ne. I think Iseya-san looked really kakkoii ne, especially in this clip!

Wentz: *points to the menu* What would you recommend?
Owner: The no.1 recommendation is… me.

Then he said the beer here is the World no. 2. First, it’s frosted at super low temperature, and second, he made them wait 5 seconds before drinking, saying it’s the best timing for it to be delicious. When the three have placed their orders – shogayaki set for Kenken, fried vegetables set for Iseya, and crab cream croquette set for Wentz, the owner said “OK, 3 steak sets.”

Wentz: (to Kento) Have you become close to Iseya-san?
Kento: Yes.
Wentz: Do you think he’s a bother?
Iseya: *hits Wentz*
Kento: No, not at all.
Iseya: We are 41 and 22.
Wentz: Almost half the age.
Iseya: (To Wentz) When I was around his age, I stared appearing in movies, I used to think that 40 year olds then were pitiful. (To Kento) You think that of me, right?
Kento: *LOL*
Iseya: Like for girls who are 18, they’d think that 20 year olds are ‘aunties’, right? You’d think even worse for me, right? Kento-kun? You think I’m pitiful, right?
Kento: *LOL* no, no.
Wentz: A weird ojisan is speaking.
…
Wentz: But you look really young!
Kento: Very young.
Iseya: Not at all.
Kento: He doesn’t feel like a 40 year old.
Iseya: How does society view a 40 year old?… Oh, isn’t the (owner) close to my age?

And they decided to ask the owner what’s his age, but the owner refuses to give an answer, and even asked them to make a guess.

Turns out he is 47, and Kento’s guess was the closest.

Next is an Indian curry restaurant that a lady recommends. It’s buffet style but just for this program, they brought the food to the table for them. And they talked about what they do in their free time, if Wentz goes out at all since he doesn’t seem to get tanned etc. Then Iseya-san asked Kento “What do you do after you get back and before you sleep?”

Kento: Like buying bento home to eat, and watching TV shows that I recorded.
Wentz: What do you record? Shows that you appear in?
Kento: No. Shows like “Ametalk” (a TV Asahi program).
Wentz: At least say a program from NTV! (Kayou Surprise is from NTV)
*LOL*

Once they left the shop, they were complaining about the heat lol. Then Iseya asked a lady if there’s a shop selling snacks. Along the way to the shop, Wentz said that he liked to eat Kinako sticks when he was young. And Iseya was like “Are you for real? That’s something I would not eat! I’m bad with Kinako.” Kento also said that “it’s something I didn’t really eat.”

Kento said he’d go ask for permission for filming once again, and in the shop…

In the shop, the old lady was kyaaing over Iseya-san lol. And they found so many nostalgic snacks. Wentz found his Kinako sticks and asked the other two to eat it….

Finally, they went to another cafe, and Iseya went in to ask for permission.

They walked too much so when they saw the menu…

Iseya: They have coffee float.
Kento: Coffee float is good.
Wentz: Me too… this is difficult… I want hamburger.
*LOL*

When his hamburger came:

Kento: How many meals do you have today already?
Wentz: Not sure. I had to do Sukkiri so I already ate at 5am.
Iseya: Hard worker. Then, what was your salary for last year?
Wentz: 46yen. I get 8yen for each episode of Kayou Surprise.
*LOL*
Wentz: It was 6yen until the other day.
(PR for JoJo by Kento and Iseya)
Staff: OK. CUT!
Iseya: Thank you very much.
Kento: Thank you very much.
Wentz: Since the camera isn’t filming anymore, tell me what’s your annual salary?
Kento: *drinks coffee float and looks at Wentz*
Wentz: *hits Kento* You were about to say it. Don’t do that!