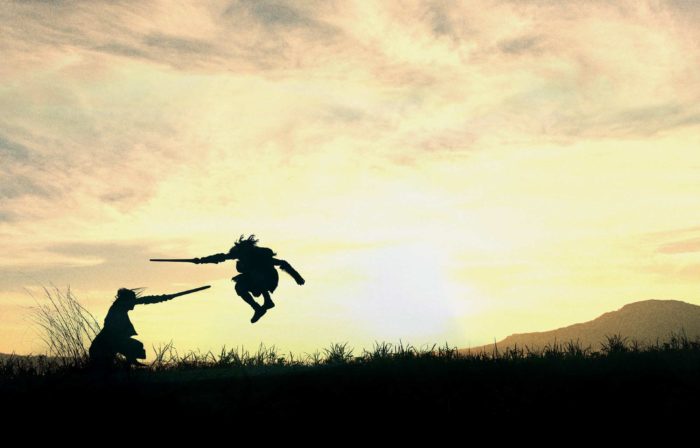 At JUMP FESTA yesterday, Kingdom author Hara Yasuhisa and movie producer Matsuhashi Shinzo were on stage to talk about the Kingdom live action movie. I’ve translated some of the interesting bits from news articles and fan reports.

The planning for the movie started in 2015. Matsuhashi said that Kingdom was a movie everyone wanted to make but as production cost would be sky high, it was something they couldn’t afford. But the turning point came when Sanford Panitch, President of Sony Columbia Pictures, said he wanted to make a Japanese movie. Sanford was the executive producer of ‘Titanic’, so Matsuhashi thought it might be worth telling him about Kingdom i.e. he might have the $$$ to fund such a movie. He sent over 5 volumes worth of English-translated Kingdom manga to Sanford, and three days later Sanford came back with a “Let’s do it!” reply. Then, Matsuhashi approached Hara-sensei with the proposal.

Hara-sensei was happy to be able to participate in the script production. He didn’t just give words of advice, but actually took part in script meetings with the director and staff. Hara-sensei said that they were even re-aligning the script all the way until just before filming started. He revealed that the movie will span only volumes 1 to 5 of the manga, but if they strictly followed the manga, it will fail script wise. Hence there were scenes where he told them that “it’s okay to discard that scene” or “let’s join the scenes this way instead” etc.

Hara-sensei also said that there will be scenes where fans of the manga will go “oh, this part is different~” when they watch the movie, but he feels that it’s more interesting this way. He has also penned new lines that doesn’t exist in the manga. He confessed that while he was writing a particular line, he “felt like crying” (lol). Matsuhashi added, “Everyone had tears in their eyes. I’d like fans to look forward to that line.” Apparently, it’s said during the climax battle and is something that defines ‘Kingdom’.

About the casting of Yamazaki Kento as Shin, market research was carried out where Kento came out tops. Matsuhashi himself has worked with Kento before numerous times (like in Saiki Kusuo & Wolf Girl and Black Prince), and even though he has played all kinds of roles before, he felt that the real Kento’s character was very much like Shin.

Hara-sensei also confessed that “I had the impression of him being a popular modern day good looking guy. But people around kept telling me that he’s like Shin.” When he met him in person, he felt that Kento was really someone who was pure, honest, straightforward, and loved by everyone. “He’s really like Shin. Even though he’s the lead actor, he’s being bullied by people around him (lol). But that’s where the love is. He has that power to make people feel that ‘I want to work with this guy’ (just like Shin). His acting is amazing too. This role fits him to a T.”

Before Kento cranked in, he discussed with Matsuhashi on what kind of body is best for the role. Although he needed to be muscular, Shin was a war orphan (slave boy) to begin with, so he needed to be thin. Therefore, Kento abstained from alcohol and ate only chicken breast and broccoli. He underwent action training for 3 months prior to filming as well. “He lost weight but built muscles to achieve that slim-macho body for us. He has excellent reflexes so his movements in those sharp fight scenes were awesome.”

Osawa-san who plays Ouki also gained 17kg for his role. He ended up looking “like a pro-wrestler”. The two of them ate only meat to maintain their muscles throughout the filming, and in China, everyone also accompanied them to eat meat.

Hara-sensei also complimented Hongo Kanata for his portrayal of the evil Sei Kyou. He also mentioned that Hashimoto Kanna was a big fan of Kingdom and kept saying it was “like a dream” when they met in China. As the casting took place about 2 years back, Yoshizawa Ryo wasn’t really well-known then. But Matsuhashi reassured that he’ll be popular by 2019, and indeed Oryo has been gaining a lot of attention recently. Matsuhashi was producer for the Gintama movies too, which I personally feel was the reason for Oryo’s popularity boom, so I guess that’s how everything gelled together~ Matsuhashi has good foresight!

During his closing speech, Hara-sensei said “I’ve heard some fans saying they love the manga too much so they are not watching the movie. But I feel that it’s definitely a movie you should watch! It has become such a movie so I hope you’ll go see it in the theatres. If you’ve not read the manga before, please also watch the movie, and if you find it interesting, please buy the books (lol).”

Kingdom is perhaps the most expensive Japanese movie being made this century (!) according to Matsuhashi, with production cost of over a billion yen, which also means the movie needs to be a hit or there won’t even be grounds for consideration of a sequel. I know it’s still early to talk about sequels, but with such a strong material as base for adaptation, it’ll be a real pity if it just ends here.

This is only 5 out of 52 volumes that’s been released so far, and only 5% of the entire story (since Hara-sensei aims for 100 volumes). This is only the beginning yo~

And since we’re on the topic of volumes, Hara-sensei also said that if nothing goes wrong, he intends to release Vol. 54 on the opening day of the movie i.e. 19 April 2019, exactly a year after Vol. 50 was released.

April’19 will be a Kingdom-filled month. Can’t wait already! =D