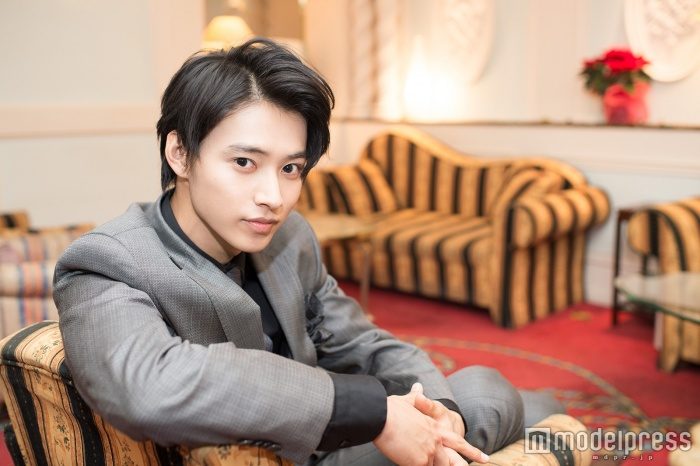 Most of this interview is similar to Oricon’s that I translated earlier, but there are some parts which have not been covered, so I’ll be focusing on those here.

Yamazaki has had many lead roles to date in movies, but in dramas “Todome no Kiss” is suprisingly his first. This interview took place in December last year at the filming location. As he was also filming for “Rikuoh” then, and the two roles are very different, he was starting to “not know what’s going on” lol.

With regards to Todome no Kiss, 「There’s always something unexpected happening (lol). First, to get killed by a kiss and waking up 7 days back is unexpected. Furthermore, Outarou is willing to do anything for money, so working as a host to him is the fastest way to achieve that. For a guy like him, if he were to make use of the power of the kiss to return to 7 days back, I wonder what will happen. Some different emotions might slowly develop from there which might be interesting.」

About playing a host, 「My strongest impressions of hosts are of Sasaki Kuranosuke in “GiraGira”  and Kitamura Kazuki in “Yaoh”.」But Outarou is different from that, he is the gentle kind who offers a listening ear to his female clients.

Many of the cast have worked with him before in the past, like Arata Mackenyu and Kadowaki Mugi. Kento said that he’s really happy to be able to work with them again like this.

As for Shison Jun who plays Outarou’s kouhai host Kazuma, it’s in fact their first time acting together. Modelpress heard that they’ve got many similiarities? 「Yes, we do! We’re the same age, same A bloodtype, and even our heights are the same. To the extent that we thought 『why have we only met each other now?』(lol). 」

As for Suda Masaki, they’ve known each other since they were in their teens, and the last time they acted together was 4-5 years ago. 「We usually go out a lot in private, but there weren’t any chances for us to work together, so when this was decided we were really happy and talked about how 『this looks interesting!』. Suda-kun’s role is a key person with mysteries surrounding him, his physical appearance is also interesting.  He told me 『Kento, you also want to do such a role, right?』, and I said 『I want to do it too!』(lol). I was really happy at the scene where I shouted 『Help me!』 to Suda-kun. In the drama, it was a scene where our characters first met, but in real life we’ve already known each other for so long (lol). We are close to begin with, so it was a strange feeling trying to search for the right proximity between our characters while acting.」

So what are Yamazaki Kento’s aspirations for 2018?

「I’m a toshi-otoko so it might also be an unlucky year, so I’ll take things one by one, carefully, and firmly. First, I’d like to do my best in the filming so that 『Todome no Kiss』 will reach many viewers. I’ll start the year as a scum, yes (lol)」