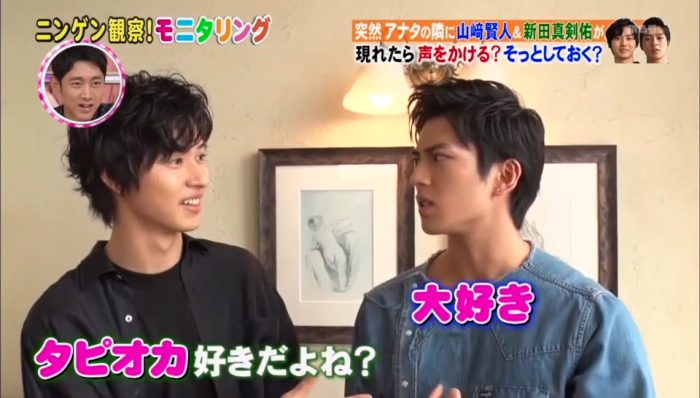 Introduction: What would you do if you see celebrities on the street? Will you call out to them? Will you leave them alone?

Are you guys close in private? What do you call each other?

And the Monitoring starts.

The two walk along Takeshita Dori, which is Yamazaki Kento’s starting point. It was along this street that he was first scouted. Kento pointed to the exact spot where he was scouted! He was in the 3rd year of middle school then.

They went into a clothes shop wanting to buy some clothes. By this time, many people have noticed them and gathered outside the shop. It’s not that easy to go unnoticed in such a crowded place ne! Two girls went into the shop and Kento said to them “We look like Mackenyu and Yamazaki Kento. Can you choose some t-shirts for us?” And the girls chose a “Udon” T-shirt for Mackenyu, and a “I’m not bald” (LOL) for Kento. By the time they left the shop, they had to be escorted but along the way back to the van, Kenken gave a high-five to a foreigner who said “ganbatte ne” to him. He also high-touched a few others.

Back in the van, they were sad that they couldn’t make it to the bubble tea shop.

So they decided to try attacking from the opposite entrance of Takeshita Dori. This time, their strategy is to “look down”. They started singing the song “ue wo muite arukou~” (look upwards and walk) but changed the “ue” (up) to “shita” (down)… So it was like “shita wo muite arukou~~” and then they both stopped singing cos none of them knew the lyrics to continue LOL!

They finally reached the bubble tea shop without being noticed. And they managed to get hold of the bubble tea when some fans went up and asked “Excuse me, are you Mackenyu?” “Yes, I am”. And they shook hands with him. Then more girls went and asked “Are you Yamazaki Kento?” “I like you.” “I’ll watch JoJo.” and KYAAA~~~ lol.

And there was panic once again in Harajuku. Macken managed to sneak away very quickly. But after walking for awhile, he realised “I left Kenken behind!” XDDD

Back in the van, they were sad they couldn’t get to eat their pancakes.

So they went to this pancake shop called Rainbow Pancake. The shop staff knew that they would be coming but the guests don’t. The first pair of girls…started feeling hot just because they realised these two ikemens were sitting beside them lol. Kenken started to talk to them “do you come here often?”… and Macken asked “do you have any worries?”. Kenken then asked for their age, and they answered “21”, but Macken was so busy eating the pancake that he totally didn’t pay attention. After eating the pancake, Macken asked the girls “so how old are you?” and Kenken said “they said 21.” XD

The second pair of ladies…didn’t show much reaction at first. Until when their pancakes were served, Kenken turned towards them and said “oh the pancake looks nice” then the lady realised who they were. They couldn’t eat properly after that cos Kenken and Macken were “too sparkling”. Kenken said “I’m sorry. Please eat.” lol.

Their pancakes came and this time it was Kenken’s turn to ask “do you have any worries?” and the lady answered “I’m single.” How would 22-year-old Kenken respond to this? “Well, there are…many…different…kinds of happiness.” After they left the shop, the lady said that their faces were as small as this *points to the pancake*. “They were sparkling”. “I was shaking so much I couldn’t eat.” XD

Macken: We don’t usually get to experience this.
Kenken: Like a JK (joshi kousei, female high school student).

And the next episode is Yamazaki Kento & Komatsu Nana in disguise @ USJ! That would be so fun! I don’t think anyone would be able to recognise them like that hahaha~