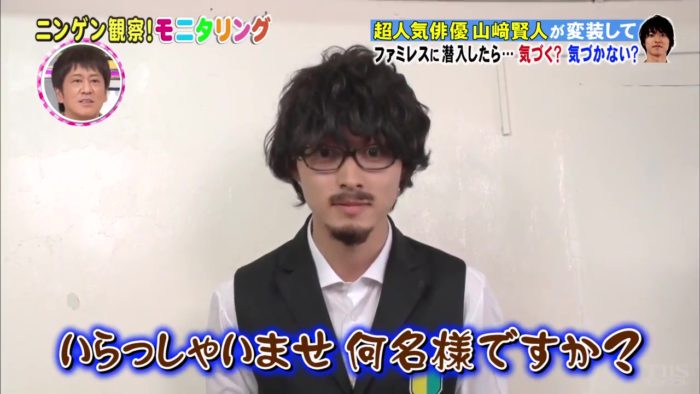 This episode of Monitoring was hilarious. This cut (pw: name of this site, which is also the URL without the www.) is about 21mins long. I’ll try to translate below for people who are interested. It’ll be long so do bear with me hehe… “What if a celebrity in disguise infiltrates a family restaurant… will you notice? or will you not?”

Staff: Do you usually go to family restaurants?
Kento: Yes. I sometimes go there now too.
Staff: This is your fourth time on the show.
Kento: The first time, I was the audio staff of a tv crew. The third time, I went to USJ and enjoyed myself (lol).

So, our ‘veteran in disguises’ started picking hair wigs and stuff, and tada~ Waiter Kento: “Welcome. Table for?” (in an accent that shows he’s not from Tokyo)

So, the setting this time is: a newbie family restaurant staff who came to Tokyo from some other part of Japan. The restaurant that they filmed at was Juraku in Asakusa. Apart from Kento as the “newbie waiter”, all the customers sitting on the left side are accomplices in the prank. The first target is the group of two females.

Just when they thought Kento is ready to “attack”… Staff: Don’t tell me, you are nervous?
Kento: I am nervous.
Staff: You seem rather nervous.
Kento: I don’t know what I should do… What should I say to them…
Staff: Shall we do it now?
Kento: Can I not do it? *LOL*

But he still went ahead, and brought out water for them. They ordered 1 omurice, warabi mochi, lemon sour, and ika yaki. Kento repeated their orders, like how normal waiters do. But what he brought out later was 2 omurice instead lol. The girls were like “we only ordered 1”, and he apologised for his ‘mistake’. Then he asked them, “what other dishes did you order again?”, and the girls patiently repeated their orders. Even though they looked at his face, they didn’t seem to recognise him.

The girls started eating, and to ‘apologise for his earlier mistake’, Kento came out and told the girls that he will give them an item for free.

It’s only ONE item, but he needs to note it down?!

And so, our waiter ran off to take his memo… but when he came back, what he had with him was an A4-size memopad! LOLLL! Such a big writing pad to write ONE item ne =D But what Kento came back with was MANY (ippai, same romaji but different intonation) cups of oolong-hai! LOL After this, Kento came out and sat at the next table to eat his staff bento. The girls were saying, shouldn’t he not be eating staff bento here (in front of customers)? They looked at him again, and one of the girls said “he looks stylish” and the other said “doesn’t he have a small face?” Then Kento said “it’s delicious~” which made the girls look at him again. It was then that one of them said, “Isn’t he Yamazaki Kento?”

Kento showed them how his staff bento looks like. Girl on the left was like “holy shit, it’s definitely him (Yamazaki Kento).” And the girl on the right invited Kento to sit beside her. She drank her alcohol and murmured “he’s got such a pretty face~~” then couldn’t stop smiling and staring at him lol~~

And so, he has the power to change a person’s expression in an instant ne lol. The tv crew came in and monitoring ended for them.

Second target is another group of two girls. Kento took the order of the two girls, then…

Then he brought the drink for the lady, and after leaving it at the table, he just stood there doing nothing lol.

Then, he saw some ‘dirt’ on the floor and commented out loud, “How dirty…. Tokyo is dirty…” followed by “I want to go home~” *LOL* Then, he came out with a mop! The two girls were so amused by this strange waiter that they kept looking at how he mopped the floor. And the way he mops look like he’s doing Curling (the sport)~ The girls then called Kento over and asked for ice tea, clearly an excuse to look closely at his face. They were already quite sure that it’s him, and requested him to take off his spectacles. He took it off and the girl was like “it’s definitely him!”, but Kento still calmly told them that “many people tell me I look a lot like (Yamazaki Kento)” haha~ The film crew came in and monitoring ended. They asked the girls what kind of waiter he was, and the replies were “a strange guy”, and “he was huge, black and strange” LOL

And the final targets are two groups of girls.

Thank you, Monitoring, for the service cut of Kento eating soba in the kitchen before he was called out to serve his customers! Good to see him eating ne! =D *Admin note: it’s normal for Japanese to slurp their noodles loudly, unlike in some countries, so yeah for Japanese, it may be considered rude not to slurp your noodles or soup~ The first prank he did to the four customers… was to be a super enthusiastic waiter, or maybe OCD as he couldn’t stand seeing the water level go down in their glasses hehe. When any of them takes a sip of water, he’d go and refill it immediately. He even showed how skillful he was by filling the water right to the brim without overspilling LOL.

Then he started taking orders.

But what Kento brought out was 3 omusubi!

The girls laughed at the sight of the rice balls, but didn’t correct him. Instead they found it amusing and decided to take a photo with it. They probably wanted to post on SNS something like “We ordered omurice but were given these omusubi instead.” haha~ Next, the other table.

After Kento left (and I think Kento was already trying to control his laughter), the girl was like “what kind of menu is that? (Steven Spielberg) is a person, right?” lol

Kento was laughing as he entered the kitchen. He realized that he might have gone overboard, cos even a newbie staff wouldn’t call hamburg steak “Steven Spielberg” right? lol but he tried to defend himself, saying that his identity hasn’t been exposed yet.

Then, for the climax of the prank, Kento walked out with a birthday cake and sang “Happy Birthday” to the girl….

And the girls didn’t realize it was Kento until the film crew came in…XD Kento was happy, cos it means that he has succeeded in his prank =D The female guests in the studio said that he might try to cover his face with wig and beard etc, but his “coolness” and “style” can’t be hidden ^^