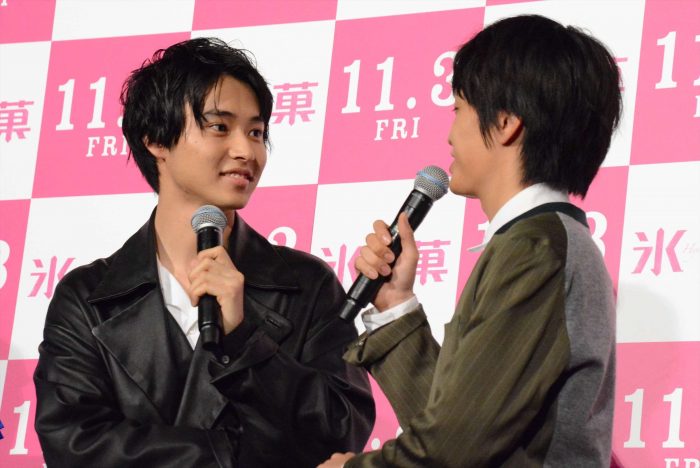 Best friends in private, Kento and Amane also play best friends Houtarou and Satoshi in the movie. But Amane revealed that “When we first met at the filming location (of Hyouka), he ignored me.” LOL “It’s like, cos we’re always meeting up for fun in private, so when it came to working together, we got embarassed and don’t really know how to react”.

Kento said, “As we stayed overnight for the filming, we played in the room and practiced our lines while eating yakiniku.” Hearing that, Alice looked at them and said, “I wasn’t invited…” Alice also said that when they were in the location bus, they’d be sitting next to each other. “When we were on the move earlier, they were saying how they were actually one person in their past life. They got separated and became two people in this life.” LOL. Yes, the “mystery” (of why they are so close) has been solved!

Director Asato added “When they were checking the monitor after shooting the scenes, they for sure had their hands on each others’ shoulders”. In response to this, the two guys were like “Did we?” “I don’t remember.” “Maybe cos we are usually always doing that, so….”

What are you curious about Yamazaki Kento?

Alice: Yamazaki-san’s love for Amane-kun
So what does Kento love about Amane? Kento replied, “…His character?” Then Amane was asked what he liked about Kento and he answered “What I like about him? … Everything.” Upon hearing this, Kento changed his answer and said, “I like everything about him too.” Awww…lol.

Amane: What is he doing during the time when he makes me wait for him?
The two hang out in private very often, but Kento was 1-2 hours late before. In response to that, Kento said “Was that so? Did I make you wait 1-2 hours?”, showing a ‘I can’t recall doing that’ look. Amane said “He replied me saying ‘I will be there soon’ but he never comes!!”, and Kento very honestly confessed, “You know there are things like traffic jam with taxis and stuff right? So with that as a reason, I usually take my own sweet time to prepare at home.” Amane also said that even though he was already late, Kento would “look so happy” when he finally arrives. There was once he even danced/skipped over to him (omg, how annoying haha XD)

What are you curious about Hirose Alice?

Director: How she’s able to switch to crying mode immediately.
Director Asato has worked with many actors and actresses before, but she’s really intrigued by how Alice can one minute be happily chatting with the cast/crew, and the next be doing a crying scene. Most actors and actresses she worked with over the years would have to spend some time preparing for the scene in a corner, etc.

Kento: Can you still wear school uniforms?
Alice said that in this industry, there’s a girl who looks like her who looks good in school uniforms (referring to her sister Suzu). “I see her very often, so while I was wearing this school uniform, I thought of the gap between us and wondered if I’d be okay.”

Some other notes from here and there:

Promotions for Hyouka, Saiki K., and Rikuou are going on at the same time and I can hardly keep up with the bangumis alone lol… I’ll try to clear as much backlog as much as I can this weekend – while the newer updates pour in uhuhuhu~ Ganbarimasu p(^ᴗ^)q