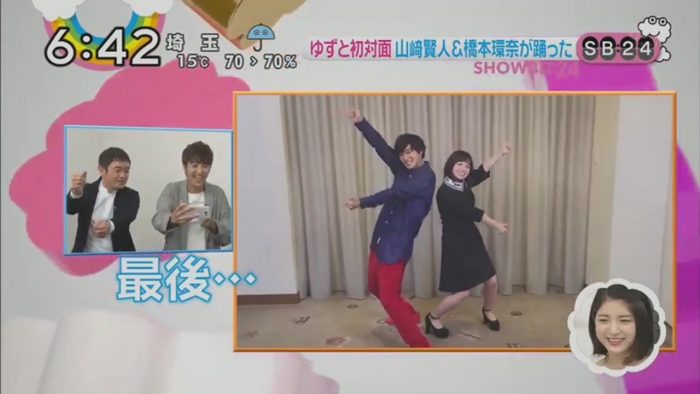 Kanna: He was singing Yuzu songs in the elevator just now.
Yujin: Really? Let’s release that! (lol) I’m glad.
MC: What’s your favourite Yuzu song?
Kento: There are many I love, like “Natsuiro”, “Tobenai Tori”, “Choutokkyuu”, “Again 2”, “Sayonara Bus”. I really love them.

Actually before this interview, Kento and Kanna did a cover dance of ‘Koi, Hajikemashita.’ and they showed it to Yuzu. While watching the clip…

Just what advice did Yuzu give Kento? What was that [something] that he lacked? The answer: As it takes two to do this “twins dance”, Yuzu feels that if Kento could “feel the presence” of his partner while dancing, it would have been better. But Kento admitted that he didn’t have the luxury of doing that since he was desperately trying to dance it properly, and apparently took 30-40 minutes of practice to finally be able to come up with something “presentable” lol.