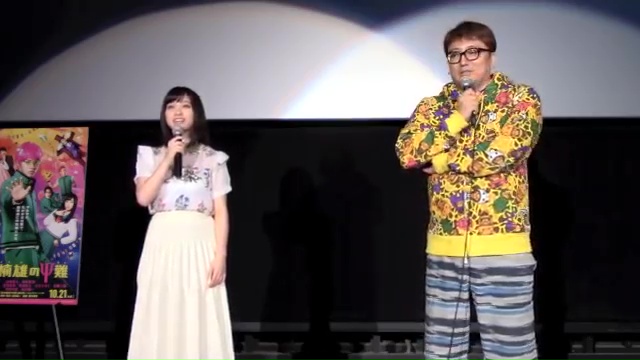 Kento didn’t attend the stage greetings in Nagoya, but he was mentioned so I’m gonna briefly translate. This video is from the second stage greeting that day.

Fan: What kind of person is your co-star Yamazaki Kento-kun?
Kanna/Fukuda: What image does he have?
Fan: Tennen (air-headed) and kinda ‘my pace’.
Fukuda: He’s exactly as you said.
Kanna: You’re correct.
Fukuda: How do you know that? You’re not even his girlfriend. (lol)
…
Kanna: Yes, he’s exactly like that.
Fukuda: I thought he’s a little more cool.
Kanna: LOL. But really, he doesn’t have an ‘other side’ [i.e. he’s the same on and off screen — btw, Tsuchiya Tao said the same about him during an interview two years back]. How to say it… He’s very “natural”?
Fukuda: He’s like a puppy. I’ve not watched every single work of his, but my impression of him as Kuro-ouji from “Wolf Girl and Black Prince” was very strong.
Kanna: He’s totally different from that (lol)
Fukuda: I had a strong impression of him doing this to Nikaido Fumi, asking her to turn three rounds, raise her hands and go ‘oof!’… He has the image of being really cool. Right?
…
Fukuda: He’s a really cute kid.
Kanna: Really, he’s loved by anyone/everyone.
Fukuda: Somehow, how to put it, he makes people want to tease him. Yesterday we teased him quite a bit.

Fukuda: The three of us went to eat steak after the event.
Kanna: Ah yes, we did.
Fukuda: I ordered 600g. I eat quite a lot. “I ordered 600g, so what about you? Kento-kun, what about you?” and he said “I’ll go with 500g.” Well, well, well…
Kanna: That was really huge… furthermore, it comes with a whole mountain of rice and salad.
Fukuda: And when he ate about 1/3 of it, he was like “I can finish all of it, totally… but do you want to eat a little?” LOL.
…
Fukuda: He’s so cute. He’s a really kind person ne…. Really. If you’re his girlfriend, I think you’d be really blessed… He’s really someone loved by everyone.
…
Fukuda: (During the filming) he was always beside me, saying “Director, what shall we eat?”… You are so cute!!! *strokes an imaginery puppy’s head* Good boy, good boy, good boy! *continues to stroke the “puppy”‘s head lol* He’s really cute…. He’s really cute. (To fan) He’s perhaps exactly as you think. Really.

Kanna: Sorry, that Yamazaki Kento-san isn’t here.
Fukuda: That’s right.
Kanna: He was able to go with us to Osaka though.
Fukuda: Maybe he’d be able to make it for the ‘big hit’ event…
Kanna: Yes, if this becomes a hit…
Fukuda: Probably we can steal some of his schedule from Rikuou, and come to Nagoya again…
…
Kanna: This movie is one where you don’t really have to use your head…
Fukuda: To be honest, it’s a movie with no content… LOL