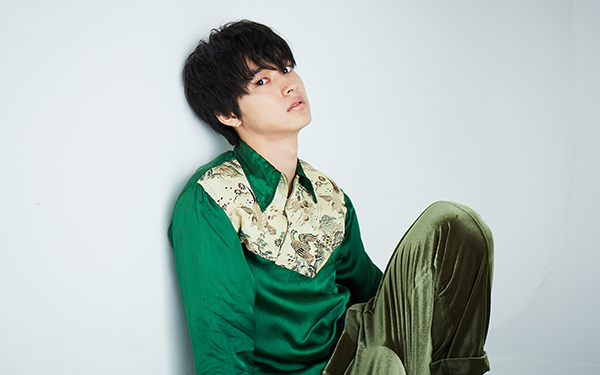 ―― This time you were picked by Director Fukuda Yuichi, and your dream of working with him has come true.

Ever since watching 「The Brave Yoshihiko」 series, I’ve wanted to work with Fukuda-san. Then about 3 years ago, Fukuda-san came to watch my stage play, and at that time when he asked me in person “Wanna do this thing called 『Saiki Kusuo no Ψ-Nan』?”, I said “I’ll do it!” (lol)

―― That was an immediate reply (lol). Before filming, what was your impression of the Fukuda Group?

In Fukuda-san’s world, there is definitely “laughter” in it, and I got all excited wondering “what’s gonna happen” while heading to the costumes-fitting session. Before the filming started, I asked Director “Is there anything I should do to prepare for the role?” “You don’t need to do anything. Don’t bring anything here.” was what he told me. ―― When you got into the actual filming, how was it?

On the first day of filming, we filmed the summer-break scene which sparked Teruhashi-san’s liking for Saiki. At that time Kanna-chan was so totally into her character. She even flared her nostrils, so I was like “She’s taking it that far!?”. It was a huge gap between that and Saiki Kusuo’s inner voice (which is rather cool), so in my heart I was going “this is gonna be awesome” (lol).

―― It was a fun filming location right?

It was super duper fun. Although Saiki has an expressionless face, everyone around him were horrible, so it was really tough trying to suppress my laughter. It was fun though (lol).

During the filming, I was just thinking 「I want to make Fukuda-san laugh」. It’s like, if Fukuda-san laughs, I’d feel at ease…. But Kaku-san who is a regular in the Fukuda Group told me that 「With the Fukuda Group, it gets scary from the second time onwards」. 「It becomes terrible when thinking of what to do to make him laugh」. That’s why I want to quickly do it for the second time. ―― Seems like from the second time onwards, he’d be asking of you to do even more (ridiculous) things…

I’m willing to do anything! Even for my debut acting job, I was naked and being sketched by others (lol). [*Note: This was for his role in Atami no Sousakan] This time, everyone really fits their roles. To the extent that Yoshizawa Ryo also said something like 「I was born just to do this role」. On the contrary for me, I’m thinking of what kind of role I should act next that could make people laugh. That’s right, it feels like I went to open it!

―― Well then, is there a new side of yourself that you found out through this filming?

Perhaps I’ve discovered my 「greed for laughter」. Even when I’m watching comedy shows, I think that comedians are indeed amazing. For example, Sandwich Man-san or Roberto-san… I often watch Roberto Akiyama-san’s 『Creators File』 and it’s my kind of humour. I really love it. ―― In this movie, you were able to experience it from the point of view of someone who makes others laugh.

I feel that 「to be able to laugh」 is most blissful. It’s like riding an attraction at a leisure facility on a weekend, “wanna go play? wanna go laugh?”. That’s why it’s a charm to be able to watch, enjoy and laugh at a movie.

―― A comedy film is something you’ve always wanted to do. What does this project look like it’ll be to you?

―― (lol). This felt very different from the image that you’ve had until now.

I feel that it’s exactly because of the image of me so far that makes the kabedon scene interesting. After Teruhashi-san’s “You haven’t seen ‘Heroine Shikkaku’ or ‘Wolf Girl and Black Prince’ right!” narration, there’s also a scene where Saiki would bring down the school building if he did a kabedon [*Note: Kento is known to be the first actor to perform a kabedon in a movie, for L-DK]. Indeed this movie is a compilation of my past roles ne (lol).

―― The cool and expressionless Saiki. What was most difficult playing him?

Suppressing my laughter. People who got close to Saiki literally came very near.

My face was being touched a lot by Kaku-san. When Kuboyasu (Kaku) took off his spectacles, he couldn’t see at all so he came really close to Saiki. At the end, he had his entire body weight on me. Because of this, Saiki’s spectacles kept moving out of place, and that was funny too. But Saiki had to remain poker face.

Director said to me 「The spectacles will move out of place, but let’s fix that with an expressionless face」 and I said 「Okay, I got it」 (lol). It was pretty tough for me trying to control my laughter then.

―― Then, please tell us a scene that you’d specially recommend.

I guess, the scene on the rooftop with Kaitou and Nendou. It was really horrible trying to hold my laughter. Yoshizawa-kun was doing it perfectly at the start, but because of my grinning, he ended up laughing right at the end. I felt a little bad about it.

―― Yamazaki-san too, you seem to fit the role of Kaitou played by Yoshizawa-san!

I like the character Kaitou, he makes me laugh. Yoshizawa-kun and I were always talking about freaking awesome Kaitou is. ―― Is there a part of you that resembles Saiki?

No (lol). Perhaps… But, just perhaps there might be some part that somehow resembles him.

―― Saiki is a boy who doesn’t get influenced by his surroundings?

―― (lol). Then, looking back at the times when you were in school, was there something that you wished you had done?

I wish I could have enjoyed myself more. But (to make up) for that, I was able to play high school student roles over and over again, so I feel that I’m lucky.