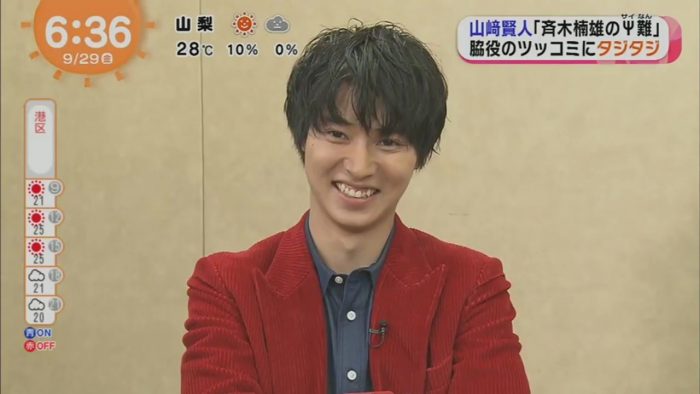 Saiki Kusuo no Ψ-Nan is Yamazaki Kento’s first role in a comedy movie.

Kento: Because my role Saiki Kusuo’s hair is pink in the movie, I’m happy to be able to walk on that colour (referring to the pink carpet).

How was it playing high school students?

Kento: During the shinken-suijaku* game–
Staff/Kanna: (whispers) It’s shinkei…
Kento: Oh it’s shinkei-suijaku…
Interviewer: You were serious* when doing it, right?
Kento: There’s a scene where I’m playing the shinkei-suijaku game, and because I’ve the power to see-through the cards, I could match all the cards correctly. But in reality, I do not have such power, so–
Kanna: Eh? You memorised everything?
Kento: At first, I wanted to do it while memorising all the cards. But after matching 2 to 3 pairs, I couldn’t remember anymore…
Kanna: Only 2-3 pairs? Isn’t that too early? LOL
Interviewer: Yamazaki-san, you are kinda… airheaded?
Kento: (lol) No, I’m not.
Kanna: LOL.
Interviewer: And the name of that matching game is…?
Kento: Shinkei-suijaku =D
….
Kento: Ah just now I should have said “shinken”.
Kanna: Can you please not do your self-reflection in front of the camera?
LOL.