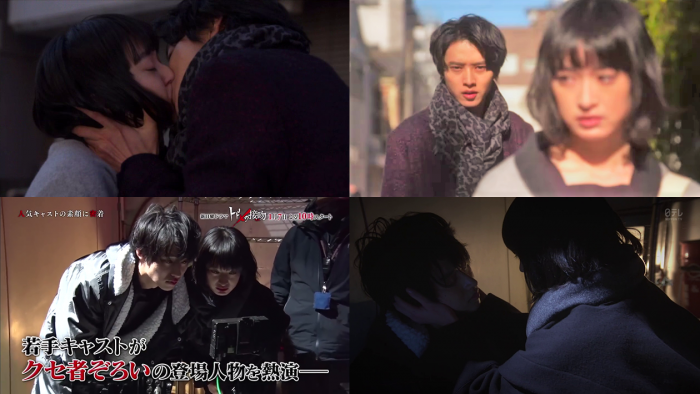 Above: Some Kento-Mugi moments from Ep2/3 and the making

― What are the difficulties you face when you play the role?

Mugi: Because we keep time leaping, even after reading the script and at the filming location, I get confused (lol). Regarding this, I think Kento-kun is having an even harder time than me, but after each rehearsal test, he will take time to confirm with me on the timeline we’re in for the next scene, etc.

― This is the first time you’ve acted with Yamazaki-san since morning drama “Mare” (2015) and movie “Wolf Girl and Black Prince” (2016). How was he like at the filming location?

Mugi: He expresses his own opinions a lot. He’d say things like 「I’d like to move this way, is that okay?」 or like  「I think it’s better not to make any movements here. This way, it’s easier to convey the message.」 etc, I have the impression that he’s observing even the tiniest details.

― There are many kiss scenes ne.

Mugi: The one that leaves a huge impression was, the scene where Kento-kun had to die after being kissed. He was certainly still unclear on the 「having convulsions, lose consciousness then die」 flow but had to do the actual take, so right after the take ended, he looked at the monitor and said to the director, 「was that okay?」「I should have done it this way instead」. Even though it got an OK from the director, he did a retake. And everyone agreed that 「indeed this way is better」. I thought he was looking clearly at the whole picture all the way down to the minute details. I guess Kento-kun basically watches every bit of his own acting on the monitor. He always runs to the monitor to check right after the director shouts “cut”.