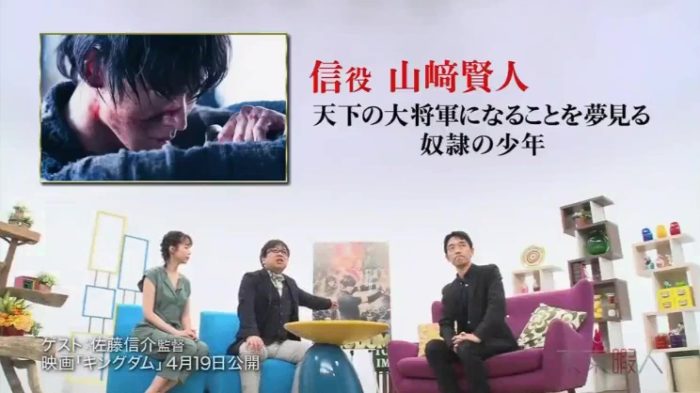 Here’s a cut of the Kingdom segment aired on “Tokyo Himajin” yesterday, and I will translate briefly what was mentioned in the clip.

The segment starts off with host Amano-san getting all excited cos Kingdom is going to be released in a month!. But he was shocked to find out that not only his co-host but also all the Himajin staff have already watched the movie LOL. Poor guy was like “I wonder who is the host of this program?!” XD Apparently he’s been dying to watch Kingdom ever since it was announced, but the Himajin producer forbade him to watch it before their Kingdom SP ep lol.

Then they showed footage from the announcement press conference held late last year. Amano-san commented that the cast then –at the press conference– had accomplished looks on their faces, faces that showed that they’ve finished filming something huge. The casting was awesome. A ‘kami’ (heavenly) casting.

Then the guest was invited onto the show — Kingdom director Sato Shinsuke, who did other big projects like “GANTZ” and “I am a Hero”. (Personally, I’m a big fan of his “Library Wars” movies!) Amano-san said he’s a huge fan of Kingdom, and that there are many celebrities who are also huge fans (like Tsukaji Muga ne ^^).

Before Sato Shinsuke got the offer to direct the movie, he had read some -not all- of the manga. Many years before getting the offer, there were talks about doing a movie but at that time it was only like a ‘dream’ as it’s not really feasible in reality. Then the offer came, and he wanted to do it. He immediately asked his staff for their opinions, but their first reactions were like “EHH?!!” lol~ and these were staff who have worked on big projects before. The scale of Kingdom is on another level altogether.

Hara-sensei was also involved in the script, and Sato Shinsuke was saying how he gave advice that became the backbone of the characters. Then they talked about how Hara-sensei cried 5 times while watching the movie, and how important the casting is. This was when Sato Shinsuke revealed that Yamazaki Kento was the first person they decided on.

Towards the end of the clip, the staff showed a placard to tell Amano-san that time is up! So, they’ll be showing us the second part of Sato Shinsuke’s guesting next week, on the 29 March episode. He’ll reveal more inside stories then.