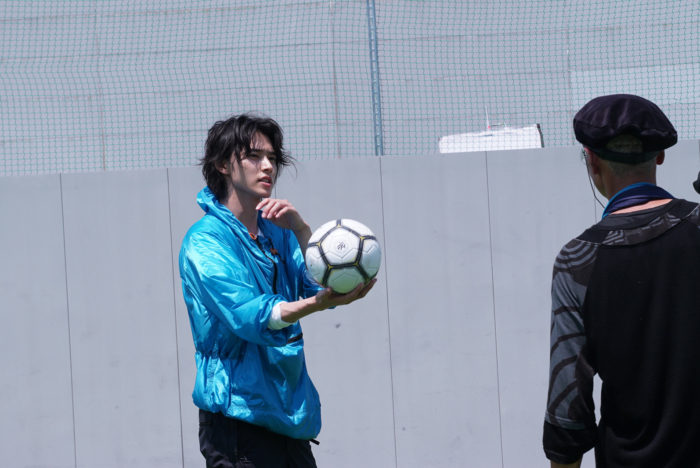 Yamazaki Kento’s latest “Lunch Pack” CMs have been released online. They will be aired on Japanese TV starting 1st September 2019. There are 2 different 15s versions, a futsal one and an office one. The 30s version is a combination of both.

I personally prefer the ⚽️ heh. The CM was filmed on a clear day. The theme is the same as the previous CM, “itsudatte, dokodatte, bokura no mikata lunch pack”, loosely translated as “anytime, anywhere, our ally is the lunch pack”. Whether he’s at work or playing soccer with his friends on his off days, he eats the lunch pack! XD For the futsal scenes, Kento wears a blue parker, same color as the “tuna mayo flavour” lunch pack. He said it’s been half a year since he last played futsal so he was really looking forward to the shoot. Under the hot sun, he was enjoying himself as he shot towards the goal, made passes with fellow cast, etc. He also did “lifting” (in other parts of the world, this is called “ball juggling” i.e. to keep the ball from touching the ground~). He did about 25 consecutive times for this CM, however back when he was playing soccer, his record was apparently 2000 consecutive times! Sugoi!! For the office scenes, he wore a brown necktie, same color as the “peanuts flavour” lunch pack. He played a business man coming back from a meeting, and having the lunch pack in office in between his busy work schedule. Staff: When you are busy, what is your ‘ally’?
Kento: Lunch pack!! (lol)
*The staff was really happy about this answer lol*
Staff: Apart from lunch pack, what are your other ‘allies’?
Kento: Eating delicious food, meeting my friends, watching movies, reading mangas, moving my body etc. In any case, I will do things that will make me feel refreshed.