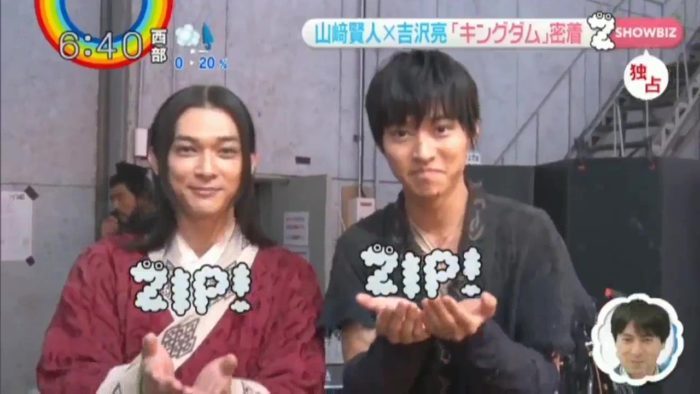 As tweeted earlier, ZIP! shared some behind the scenes footage from their exclusive visit to the Kingdom set in May last year. This should be during the Japan part of the filming which was done in Kumamoto, Kyushu.

ZIP! 2019.3.26 5:50～
Kingdom Behind the Scenes ②
They showed a bit of the fight between Shin and Saji, then Kanna and Ryo talked about their costumes. Ryo also said he trained with Kento for the fight scenes for about 2 months before the filming.pic.twitter.com/jFRsN1p1Bq

To add on to the tweets, Kanna-chan said that her costume has a hood attached to it. If she covers the hood, she won’t be able to see anything in front. It’s also quite heavy. Karyoten is a character who should be able to run away fast, but it was difficult for her to run in that costume. Oryo showed his long sleeves, saying they’re unexpectedly heavy. When he’s doing the fight scenes, they will be flapping around and sometimes he gets hit on the face LOL.

My favourite of all of this? Seeing Shin FLY! Honto sugoi! It’s just like in the manga!