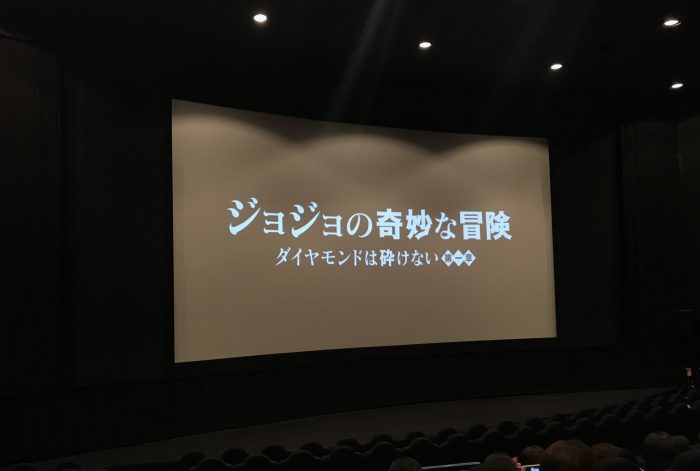 This was the 6th and final stage greeting held on the second day of JoJo movie release. It turned out to be one of the most precious memories I have of an aisatsu so far. So glad that I attended. To summarize, in 20minutes, I got to see/hear Kento sing/screech, speak French and speak English =D

They stood in this order (left to right): Macken, Nana, Kento, Kamiki, Miike.

They entered from the right, so Macken was the first I saw and he kinda “skipped” onto the stage lol. The MC asked Kento to address the audience, and he said “Good evening. This is Yamazaki Kento who plays Higashikata Josuke. Now–eh, now–(to MC) have they watched? (MC: not yet). Everyone, please enjoy yourselves. Yoroshiku onegaishimasu.”

Kamiki greeted us good evening, that it’s hot outside and the movie is hot too. Nana said this is the last aisatsu so please enjoy. Macken, even before the MC finished introducing him, raised his hand up and said “Hai! I’m Mackenyu who plays Nijimura Okuyasu… Since this is the last one, I’d like to use up all my remaining energy here.”

Director Miike said (looking at the four young actors and actress) “It’s nice to be young ne~~” and that in between the second and third aisatsu, he drank a little too much alcohol so now his body is “not in a good condition” lol.

MC asked Kento how he’s feeling, now that this is the last stage greeting. Kento was like “Sou desu ne….eh… ano… really, hai… sou desu ne… the last one… erm… but ano…. [note: the usual Kento is back! lol~] JoJo’s opening was yesterday, it’s only today we get to do the greeting, so really…. ano…. I have a lot of feelings.” and Macken said “Sorry, this is the last one so his brain isn’t working ne” lol.

Q: Which scene do you think you were most kakkoii in?

Kamiki: There are none. If you watch the trailer, I seem to only have scenes where I look shocked!

Nana: I don’t have any too. I’m always looking serious.

They asked the rest of the cast which scene was Nana good in.

Kento: Everything was good.
Macken: (imitating Yukako lol~) I’ll protect you.
Kento: When she moved the chair towards Koichi…she’s smiling but it’s a scary expression.
Kamiki: Scary. The gap is great… She’s scary in the movie, but Komatsu-san is always grinning in real life.

Back to “the scene you were most kakkoii”:

Macken: The last half of the movie… The scene with Josuke, the last part where Okuyasu changes… and something that Josuke said to him… (whispers) I hope you’ll watch it.

Q: Which scene of Josuke do you think is good?

Kamiki: When he first got angry.
Macken: (imitating Josuke lol~) What the hell did you just say?!
Kamiki: That was on the first day of filming. Kento was worrying ‘what should I do? how should I do it?’.

Q: Director Miike, what are your memories of the filming?

Miike: I think it was difficult for Josuke, being such a strong manga… there was nobody to help him. He did well in his character creation and challenged himself. In the movie, we saw Josuke’s growth. As an actor, we also saw Yamazaki Kento’s growth. The one who doesn’t change is Okada Masaki. That guy is really kakkoii in this movie. But in real life, he’s always easily frightened. Like this morning, someone tapped him on the shoulder from the back, and he went ‘ahhh~~hhh~~ why did you tap meee???’ while holding some juice lol [The way Miike acted it out was so funny!]

Nana continued talking about Josuke’s charms, “he’s cool when he’s serious or when he’s angry, and if you watch the movie, you’d start to like Josuke”. It became like a Josuke-praising corner and Kento was like “ureshii~~~ hazukashii~~” lol

The MC asked Macken how he felt about acting with Kento. She mentioned that “during the interviews, you said that you were very happy to work with him” and Macken immediately said “did I say that?” (lol) then later he looked at Kento and said “I’m happy, you know~ I’m happy~ (to MC) eh, what was the question again?”

MC: “What’s kakkoii about Josuke?”
Macken: I think Keicho is very kakkoii. Okada Masaki, he’s really cool. As his brother, I was happy to follow him. Eh?
MC: Can you talk about Josuke’s scene? (lol)
Macken: Oh, Josuke’s scene! There are many. Like when he first appeared (MC: that was mentioned already) Oh, erm… the scene where he crossed his legs (MC: that was also mentioned already) Oh I see. Erm… the scene with Okuyasu, and the scene with Keicho… and at the end where– (Kento *whispering*: no spoilers!) Yeah. That last scene-is-interesting-desu!

How was the filming like in Spain? Director talked about how he found Sitges to be perfect for Morioh. If in Tokyo, every day after filming, the actors would go home and it’d become their private times. The next day, they’d arrive on set and become actors again. In Spain, they’d spend their normal days as their characters. So they were kinda ‘freed’ over there. [Not sure if my ears were playing tricks on me but I thought I heard him say ‘nudist beach’ too lol]

Then, when the MC said that it’s come to the end of the session, Director Miike said to the rest “aren’t you guys going to sing?” and some fans went “Sing, please!”

And Kento started by singing just one note “ah~~~~~” then “eh?” cos nobody else followed after haha. Sorry it’s difficult to describe, but they wanted to do a chord thingie where 4 of them would sing one note each: C, E, G and high-C…. and the first person to sing would be holding his note the longest. (Hope you get what I’m saying haha). Anyway, they started ‘practicing’ with all kinds of “ah~ ah~” etc… and then suddenly Kento did a high-pitched screech (on purpose!) LOL. I couldn’t stop laughing!

As they kinda failed, Director Miike asked them to do greetings instead (someone said, ‘like in Switzerland’), and then Kento started with:

Kento: (In French) Bonjour! Je m’apelle Kento Yamazaki.
Macken: (In English) Good afternoon, my name is Mackenyu…. I hope you have a great time.
Kamiki: @#$%^&*! (Sorry, I couldn’t get what he said, and I don’t even know what language he was speaking lol~)
Macken: And the next is Nana-chan.
Nana: Eh? What kind of flow is this? *laughs*

Then Kamiki noticed that there’s a sign that says “time’s up”, so Macken said “let’s do it” and started singing the first note “ah~~~” and Kento’s next “ah~~~” was off (so cute!), and everyone laughed. And then Macken started again “ah~~~” and Kamiki (I think) followed with the second “ah~~~” perfectly too. We were like woah! cos finally two notes blended well! But after they held for a few more seconds, nobody followed with the 3rd “ah~~~” and Macken was like “HURRY UP, YOU GUYS!” and stopped cos he went out of breath hahaha.

The MC said the session had to end now cos the screening had to start soon. And she asked “Yamazaki-san” to say a few words. But before Kento could speak…

Macken: Thank you very much for today. You’re going to watch the movie now, so please enjoy it. And this was Yamazaki Kento.
MC: Then, can we have “Mackenyu-san” to say a few words?
Kento: Erm…
Someone from the audience: In English!
Kento: (In English) My name is oh~ My name is oh~ Mackenyu. Thank you.

Kyaaa~ his English was soooo cute!! Before he left, he told us to enjoy the movie and said bye bye, then waved to all of us. It was such fun. I wish they had cams there… but then again, it’s because they didn’t have cams around that they could behave so ‘freely’ ne =D